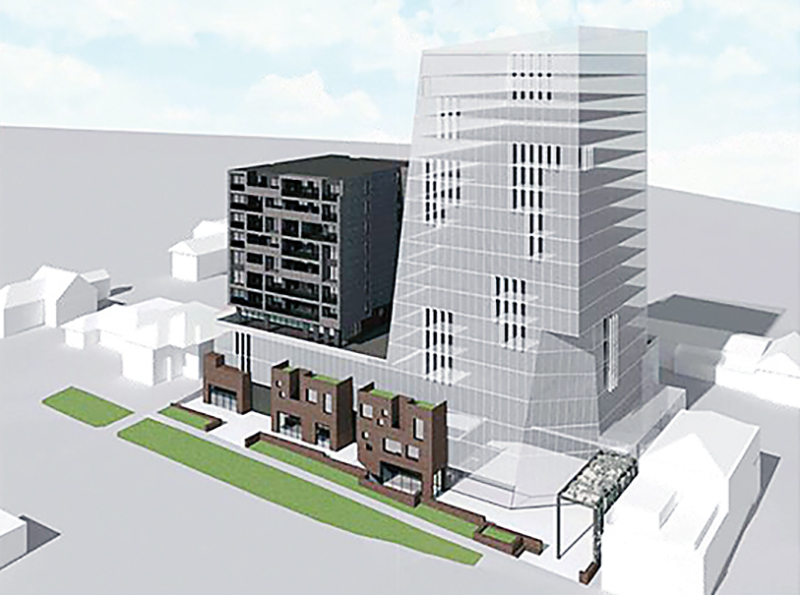 Tall order: An artist’s impression of two buildings at Davey Street. The towers are on the site of buildings in a heritage overlay. Permission to demolish the heritage buildings was denied. Picture: Supplied
Share
Facebook Twitter LinkedIn Pinterest Email

A MOVE to demolish heritage buildings on Davey Street in Frankston has been knocked back by Frankston Council.

The applicant had sought to gain a planning permit to demolish buildings in a heritage overlay at 8, 10, and 12 Davey Street. The demolished buildings would make way for two new towers, standing at eight and fourteen storeys tall.

The officer’s report noted that “partial demolition of the dwellings on 10 and 12 Davey Street, Frankston has previously been undertaken” and that “the dwelling on 8 Davey Street Frankston remains intact.”

Andrew Bromley spoke on behalf of the permit applicant at the meeting. He said the heritage building had become “more of an eyesore” and posed a “public safety risk”.

“These buildings no longer make a positive contribution to the streetscape. The fact they’ve been substantially demolished detracts from the architectural state of the buildings,” he said.

Mr Bromley said the site had been troubled by “squatters and drug dealers who continue to make their way in.” He said “we’ve been dealing with them for a significant amount of time”.

“These facades and structures are important, good examples of wealthy architecture in the period they were constructed,” he said.

“I find it astonishing to lose part of the building’s integrity in the first instance.”

He condemned the “absolute gall” of people who “put to council that we should continue to tear down the fabric of this city’s history.’

Cr Sandra Mayer said “we first issued a permit at this site in 2011, and it since seems to have changed hands.”

“I don’t understand why it’s not viable [to develop the land] without knocking the building down,” she said.

In December last year, council voted to turn down an extension for a planning permit at 6 Davey Street. Cr Mayer criticised the developer for “land banking” at the time.