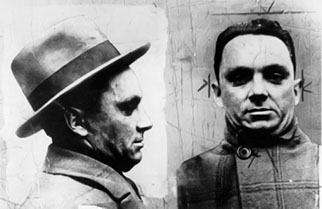 THE latest series in the TV show Underbelly focuses on the 1920s life and crimes of Melbourne criminal Leslie ‘Squizzy’ Taylor – a feared thug with a reputation for violence who amassed a fortune in ill-gotten gains from sly-grog selling, two-up schools, illegal bookmaking, extortion and prostitution.

These aspects of Squizzy’s criminal career are well documented, but a less publicised aspect involves the suburb of Chelsea. Chelsea and District Society founder Frank McGuire, in his 1985 book Chelsea: A Beachside Community, noted that the late Bill Brothwell, an early Chelsea citizen, claimed Squizzy Taylor often visited a relative who owned a shop in the town and also frequented Aspendale Racecourse with “his mobster mates”.

The diminutive Squizzy, who stood just 5 foot 2 inches, always had an eye on his public profile, even at the height – or depth, depending on your point of view – of his criminal ‘career’.

He appeared in a film based on his life in 1923 entitled Riding To Win. The Frankston & Somerville Standard newspaper reported on 22 December 1922 that the Carrum Borough Gazette “stated that Squizzy Taylor had been making pictures in the Chelsea district”.

It was this local connection that would spark a police manhunt for one of Squizzy’s associates, Richard Buckley, in Chelsea after an armed robbery in Hawthorn in October 1923 left bank manager Thomas Berriman dead at Glenferrie railway station. Berriman was ambushed by Squizzy and his gang and shot dead when he refused to hand over £1,851 he had in his possession.

Squizzy and Geelong gaol escapee Angus Murray were arrested as suspects in the robbery and murder. A third man, Richard Buckley, went on the run and into hiding.

Police raids in the search for Buckley in Chelsea ignited a battle between two local newspapers of the time, with words – not bullets – used as weapons in a turf war for top dog status in the region.

The 19 October 1923 edition of the Gazette reported police detectives and two local constables raided a home in Wimbourne Avenue, Chelsea. The Chelsea News asked the next day “Is Buckley in Chelsea?” and speculated that Chelsea was an ideal place for criminals to hide, with many police raids “seeking men who were in hiding from city sleuths”. The article claimed ten detectives had detained a person at gunpoint.

The Gazette used this report to fire a shot at the Chelsea News, claiming Chelsea had been libelled by “the off- icial organ of the municipality” and “a good deal of sensational rubbish appears in the article which is pure fiction”. Making its own inquiries with police, the Gazette concluded just five, not ten, detectives had been present and no suspect had been apprehended.

The Gazette stated it “does not stand for the suppression of any legitimate news in the interests of any person or district, yet we believe that it is the par mount duty of a local paper, to foster and protect the well being of all hamlets and towns in the district it professes to circulate in”. However, the newspaper tried to put pressure on its rival by noting the Chelsea News “carries with it some hundreds of pounds of ratepayers money per medium of advertisements and printing” and that “one prominent business man states that he is going to petition the council, asking them to censure the official organ, and to cease all business dealings with them for 12 months”.

Council was unimpressed with the att-empt to force it to withdraw advertising from the Chelsea News, with then mayor Cr Richardson saying he did not believe in censoring the press.

Buckley was eventually captured by police in Moonee Ponds seven years later, in 1930.

Squizzy Taylor was found not guilty of involvement in the Glenferrie murder, amid suspicions of jury intimidation.

The six-part series Underbelly: Squizzy airs on Channel 9 from Sunday 28 July at 8.30pm.