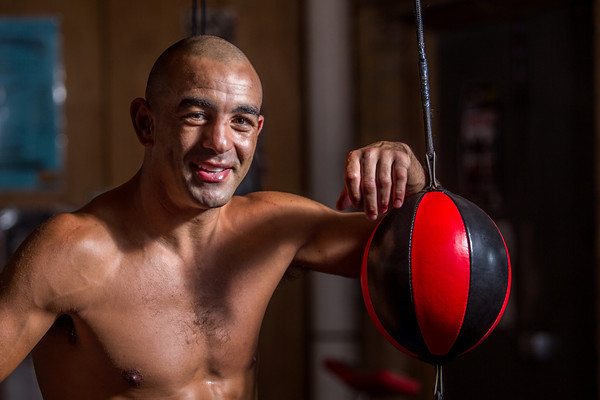 IT IS hard to know what to expect when asked to interview an Australian boxing champion. Especially if you have no great knowledge of boxing.

Is he going to be all “float like a butterfly, sting like a bee”, prancing around the room, then standing toe to toe and leaving me trembling with fear?

Is he going to turn up with “minders”… I’m envisaging big guys with no necks and lots of gold jewellery who tell me repeatedly with a menacing tone “He’s not answering that question”.

The day has come. We go back and forth a few times and agree to meet at a boxing gym in Moorabbin where he is training with a couple of up-and-coming boxers. He meets me with an outstretched arm and a broad smile.

There is no bluster or pretence here. Just an extremely fit, extremely strong and extremely dedicated boxer.

His Twitter handle says a lot about the man “Professional boxer, motivational speaker, a fighter for the underprivileged; proud father & husband.” That is Sam Soliman.

The first thing I realise is that training is everything. Sam trains six days over an eight day cycle, and if any of you have every done boxing at the gym, it is possibly the highest intensity training one can imagine.

Sam is a middle weight boxer who boasts an impressive record.

Accompanying Sam at the boxing gym in Moorabbin are a couple of young boxers. Sam trains them and they, in turn, give him someone to train with. It is an immediate side of Sam that I didn’t count on. He is dedicated to boxing; not just his own success, but the success of the sport as a whole.

The gym is nothing special. In fact, it is something more akin to a Rocky movie, and one of the earliest ones at that. Sure there are no punching cow carcasses here, but there is no great glamour. Plain walls are covered in posters and press clippings as well as framed and signed pictures of well-known boxers. A dominating motto stretches across the room reading “Nothing soft comes out of Moorabbin”. Who am I to argue?

Sam Soliman starting boxing at 14. Before that, he had spent five years doing Tae Kwon Do and other martial arts. What inspired him to get into martial arts in the first place?

Sam is of Coptic Egyptian descent, and both of his paretns were born in Egypt. It certainly must have prevented any schoolyard bullying to be so capable at looking after himself from such and early age.

These days he works with schools on anti-violence programs.

“It is called Choices and is a campaign aimed at kids between 15-17. It basically tells them that violence isn’t the answer.”

This seems a duality to someone who doesn’t know much about boxing. It seems like a violent sport.

“Boxing is about discipline,” said Sam. “It is the exact opposite to the random acts of violence that I campaign against.’

The forty year old believes he has everything it takes to get the world title. He also realizes it his one big chance.

And while Australian champion is something to be very proud of, world champion has a particular ring to it.

The International Boxing Federation confirmed Soliman as the number one contender for its middleweight title provided he won against Queenslander Les Sherrington in December and Sam didn’t disappoint.

He knocked Sherrington out and knew it was “game on”.

He stood up in the ring and addressed his adoring fans.

“I want to let Felix Sturm know that …I’m coming after him.”

After 23 years boxing, Sam is now facing his biggest test. A shot… perhaps his only chance… at a world title.

He is fighting the current world champion, Felix Sturm for the IBF Middleweight World Title in Germany on Saturday 31 May.

“Getting a world title bout is like climbing Mt Everest. It’s taken me 23 years. You get to base camp and line up at the foot of the summit for your turn to conquer the peak.”

“I’ve paid my dues, and I’m ready. I couldn’t have said that five years ago, but now I can. I’m fighting smarter, and I’m jumping out of my skin to hear the referee say: “seconds out”.

“My mission is to bring the IBF Middleweight World Title back to Australia.”

Sam has history on his side. He has beaten Sturm before. He is confident he can do it again.

Sam has now jetted off from Melbourne to an undisclosed location in Europe where he will continue his preparation.