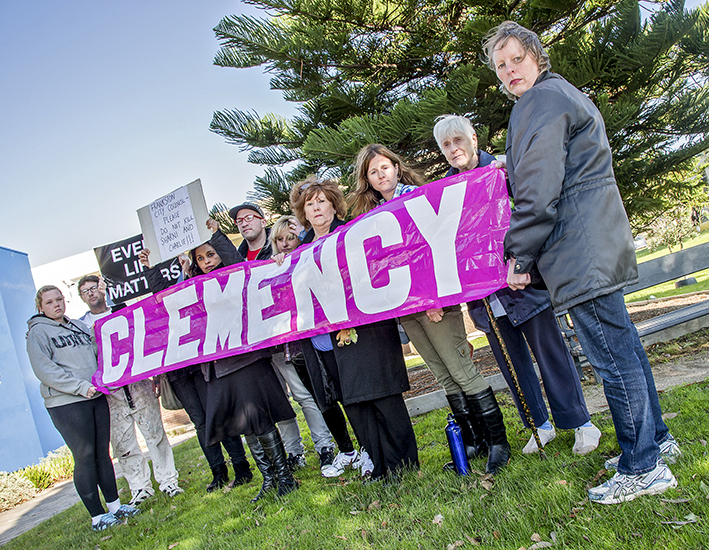 THE fate of two dogs who escaped from a Frankston backyard late last year remains unclear despite council initially declaring a final decision on whether to “humanely euthanise” the animals would be made last Friday (update: the dogs have been euthanised – see Frankston Council statement below).

The dogs, bull mastiff-cross Charlie and shar pei-cross Sharni, have been held in a council pound since November after they killed a cat while on the loose. The animals’ owners, Shannon Holt and Evan Jeremiejczyk, who live in Frankston, had taken their attempts to save the dogs all the way to the Supreme Court.

The owners’ plight has attracted national interest and RSPCA South Australia and other interstate animal welfare groups offered late last week to take the dogs into their care to avoid the need to kill the pets. Council advised an update would be provided by “close of business” on Friday but then postponed any further statement.

In March, the Supreme Court granted an injunction temporarily preventing council from putting the dogs down.

Frankston Council said there was a “risk” the dogs could attack another animal or person if they were released back to their owners.

At a Magistrates’ Court hearing in February, Ms Holt and Mr Jeremiejczyk pleaded guilty to charges of failing to register a dog, having a dog at large and a dog attack causing death.

The pair claimed council had “deceived them” by advising they would not seek an order to destroy the dogs if the owners pleaded guilty.

Frankston Council said it had been agreed that the case would be reviewed.

After a review was conducted, council stated the original decision to put down the animals would stand.

Council CEO Dennis Hovenden said the safety of Frankston residents and their animals was imperative.

“The decision was based on the nature and impact of the attack on the cat last year, and on the risk of further attack on an animal or a person should the dogs be released,” he said.

Lawyers for Companion Animals principal Anne Greenaway, who has been acting on behalf of Ms Holt and Mr Jeremiejczyk, said Frankston Council was “the worst council” she had ever dealt with.

“They have been unbelievably cruel and disrespectful to my clients,” Ms Greenaway told The Times.

Ms Greenaway understood council had rejected RSPCA South Australia and other interstate animal welfare groups’ offers to take the dogs into their care in a move which would avoid the need for the dogs to be destroyed.

“Council have taken such a hardline position on this from the start that if they’re released and people see these dogs are not marauding, dangerous killers they will look like complete idiots,” Ms Greenaway said.

The lawyer said council should have had no problem sending the dogs interstate if they were so concerned with Frankston residents’ safety.

“It wouldn’t be an issue for them.”

Frankston Council advised an update on the situation would be provided on Monday (7 July).

‘Frankston City Council has today (7 July) authorised that the two dogs involved in a fatal attack on a cat on 8 November 2013 be humanely euthanised by a qualified veterinary practitioner, and this has now taken place.

This decision was not taken lightly, our Council considers every such case carefully based on all the information available to ensure we act responsibly on behalf of our community.

Due to the legal and case review process, Council has not been in a position to fully respond to some provocative media coverage.

The owners of the dogs received a summons to attend court along with a formal notification reading  “Should the presiding Magistrate find you guilty of the charges bought by Council on this day, Council may seek to exercise its power in accordance with Section 84P (e) of the Domestic Animals Act 1994 and humanely destroy your dog.”

The accused parties appeared before the Frankston Magistrates’ Court on 27 February 2014. Acting on the advice of their legal representative the owners pleaded guilty and the Magistrate found all charges were proven.

Therefore the pleas of guilty were entered at the Magistrates Court in the full knowledge of Council’s position.

Following the guilty verdict Council considered the attack in question, the cat owners’ views of the dogs returning to the community, the dogs’ history and the owners’ previous record of irresponsible pet ownership, which Council was not in a position to release to the public.

While offers to assess and rehouse the dogs were received from interstate, these offers were made without full knowledge of the circumstances and the history of the animals.

Council did not accept these offers as they could not give a 100% guarantee the dogs would not be a risk to people and animals when re-released into a community, and Council was not prepared to hand over our legal and moral responsibilities.

It is Council’s responsibility to investigate and prosecute domestic animal attacks. Council will determine the future of the attacking animal and, where there is sufficient evidence, may humanely euthanise in the best interests of the broader community.

Council reinforces the message of responsible pet ownership, including that dogs must be kept securely on their premises, and kept on a lead when outside the premises unless within a designated off-leash area.

Anyone who requires more information about responsible pet ownership should visit www.frankston.vic.gov.au to make sure they are fully informed.’