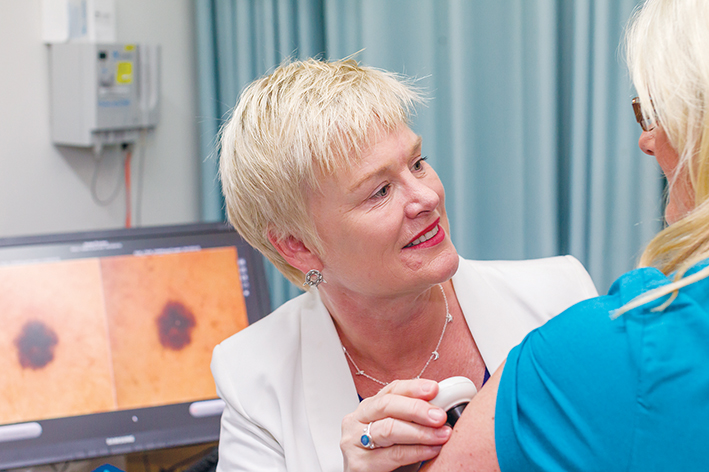 DETECTING on average one melanoma each business day on patients from Frankston and the Mornington Peninsula has made Peninsula Skin Cancer Centre one of the busiest clinics in Australia.

But it’s an achievement that leaves Dr Sally Shaw* cold.

“A large number of baby boomers have grown up tanning at the beach or in solariums in their youth and are now presenting with skin cancers,” she said.

“And we are seeing many young people presenting with basal cell cancers on their faces.”

The clinic was last week named overall winner and best personal services winner in the Frankston Excellence in Business Awards. This is the highest honour any business can receive in the Frankston City and Mornington Peninsula region.

With the skin cancer centre on track to find more than 250 melanomas this year, Dr Shaw is blaming more than one cause.

“Research shows that using solariums before the age of 35 boosts the risk of melanoma by 59 per cent,” she said.

“It has been estimated that each year in Australia, 281 melanomas, 43 melanoma-related deaths, and 2572 squamous cell carcinomas are attributable to solarium use – at a cost to the health system of around $3 million.” (This data is on the sunsmart website.)

According to the foundation’s research, first exposure to tanning beds in youth increases melanoma risk by 75 per cent. Dr Shaw admits to being “extremely frustrated” at the Tasmanian government’s decision not to ban solariums by the end of the year. She hopes this will “not be a precedent for all the other states that have agreed to ban solariums”.

“UVB in a solariums is much higher than UBB rays from the sun,” she said. “It causes the most common form of basal cancer cell – a small scab on the nose or cheek which we cut out as they could lead to melanoma.”

Dr Shaw said Australia had 10 times the melanoma rate of Europe. “There’s something in our genetic make-up that’s triggered by the sun and which is affected by the depleted ozone layer.”

Melbourne males have a 1:25 risk of contracting melanoma and women 1.30 risk. “There’s an idea that a tan is healthy,” she said. “But in most people what you see are actually burned skin cells.”

The state government announced three years ago that solariums and tanning salons would be banned as on 1 January 2015. Their numbers have dropped 62 per cent in that time.