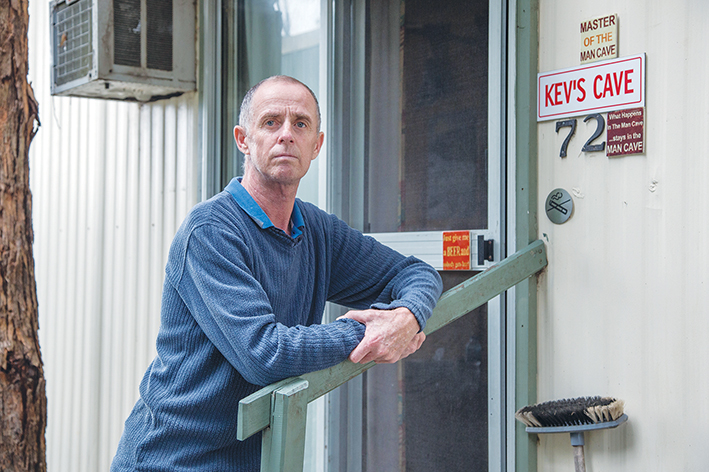 SEAFORD Beach Cabin Park residents still have the prospect of eviction looming over them with a new deadline for Frankston Council to stop a lease on Crown land fast approaching.

Council has decided not to renew the lease on part of the cabin park where 20 cabins, housing about 40 families, are located.

Residents received a temporary reprieve from eviction when council moved the deadline from the end June this year to March next year.

Negotiations between cabin park owner Michael Hibbert and council regarding a possible land swap deal which would allow the 20 cabins to remain onsite are ongoing but it seems there has been little progress in the past few months.

The cabin park offers transitional low-cost housing and emergency accommodation for the marginalised and disadvantaged.

More than 50 people attended a public meeting hosted by Seaford Community Committee last Thursday evening with the majority expressing their view that council should find a way to keep the 20 cabins onsite.

Council has previously indicated it intends to build a carpark on the Crown land section of the cabin park but now denies this will be the case yet refuses to disclose the future use for the land, citing “confidential” reasons in line with the Local Government Act.

Kevin Marley is just one resident who has voiced his fears of eviction.

“There are a lot of people who cannot afford to move out of this park and live elsewhere,” he said.

“We are all friends here, we look after each other.

“If we lose this, people have got nowhere to go. How many people are council going to put out on the streets?”

Seaford Community House and the St Anne’s Parish Social Justice Group have written an open letter to Frankston Council asking them to find a compromise to avoid evicting any residents from Seaford Beach Cabin Park.

The groups said the cabin park “appears to be well managed” and provides a refuge for the vulnerable who are coping with homelessness or unemployment.

Council rejected a previous planning application to build 51 units on the site but Mr Hibbert said he would sign a covenant prohibiting any building application for at least ten years.

“It should be about people rather than property,” Mr Moloney said.

Councillors who attended the meeting said no final decision had yet been made and residents’ concerns would be noted.