Labor campaign plan to roll on 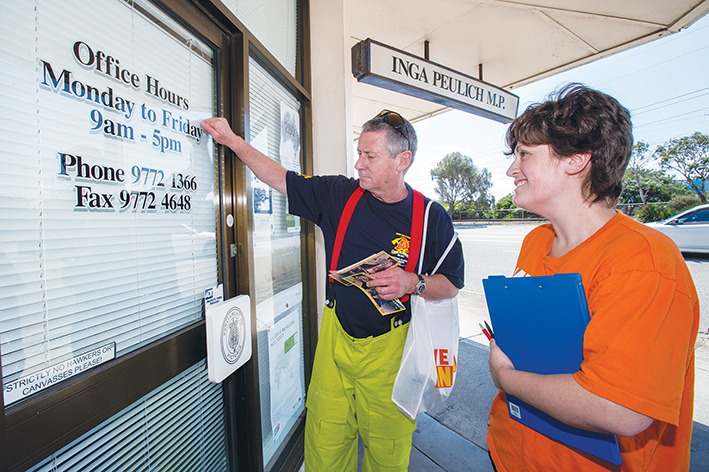 LABOR insiders have credited their “boots on the ground” approach to electioneering for much of the party’s success at winning back government at the state election after just one term in opposition.

The party recruited thousands of volunteers to doorknock and call voters in 25 marginal seats around the state, including the Frankston line seats of Frankston, Carrum, Mordialloc and Bentleigh where Labor candidates defeated Liberal incumbents.

Labor plans to effectively keep its state election campaign show on the road – and the streets – to roll the strategy out to New South Wales and Queensland during those states’ elections next year.

After that, Labor intends to take the fight up to the federal Coalition government at the next federal election using the same strategy to try to ensure Prime Minister Tony Abbott suffers the same “one term” political fate as Denis Naphine.

He reckons the swing to Labor in the Frankston line marginal seats showed the strategy works and volunteers who campaigned for Labor will stay motivated and enthusiastic if their support is not just acknowledged during immediate pre-election periods.

The party official said Labor had used “traditional” means such as TV, radio and print advertising to get its pre-election message out to voters but had also decided to try to get to those voters who tend not to “absorb political messages”.

Samaras was unconcerned when both the Herald Sun and The Age newspapers editorialised against Labor on the eve of last week’s polling day and backed the re-election of the Napthine government.

“People do read articles but do they read editorials buried within the paper? I don’t think so.”

Ensuring everyone within Labor’s ranks embraced the volunteer-led state election campaign strategy was vital to its success, according to Samaras.

He said the Labor aspect of the electioneering plan was separate, but complemented, the similar union campaign.

Trades Hall Council secretary Luke Hilakari told The Times he believed the Liberal Party had made “a strategic misstep” in campaigning “pretty hard against the union movement” as part of their pre-election campaign.

“Union members are just regular folk… and we went out and had real conversations about real experiences with people,” he said.

The union head said the Napthine government had forced Trades Hall to get involved in the election campaign. He said the disputes with paramedics, nurses and teachers could have been settled well before last month’s poll.

“It was easier to negotiate with the Kennett government,” Hilakari said.

The Trades Hall campaign was union funded and not officially part of the Labor campaign. Union members encouraged voters to “put the Liberals last” rather than ask them to vote for Labor.

“We were comfortable about people making up their own mind on how to vote.

“We’re rapt with the outcome.”

The Trades Hall campaigners knocked on 93,000 doors, made 120,000 phone calls and visited 130 booths in marginal seats including the four marginal Frankston line electorates.

As election victors, Labor has been willing to talk about its campaign strategy success. The Liberal Party are more reticent about their campaign.

Premier Denis Napthine thanked Liberal Party state director Damien Mantach in his election night concession speech for overseeing the Coalition government’s election campaign but the Liberals did seem to be outmanoeuvred by Labor’s field campaign in the weeks before the state election.

While Labor and Trades Hall were out speaking to voters, the Liberals relied on ‘cash splash’ announcements and ineffective strategies such as publishing a so-called ‘community newspaper’ called The Southern Express, in reality a thinly-disguised party propaganda brochure, to spruik their public transport promises.