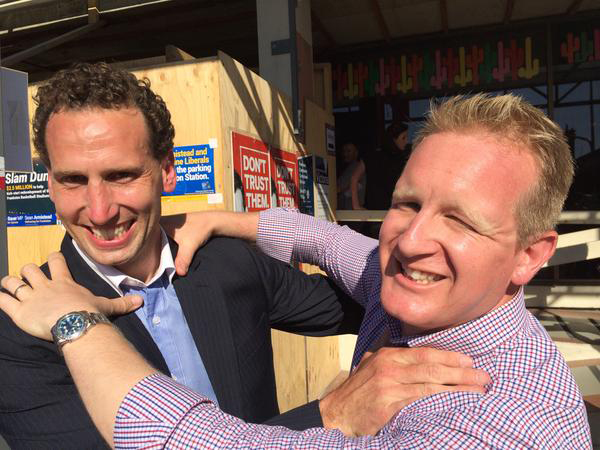 IT’S taken nearly two weeks since the 29 November state election but Frankston finally has a new member of parliament.

The Victorian Electoral Commission officially declared Labor candidate Paul Edbrooke the winner of the seat this morning at 9.30am after votes were recounted.

Mr Edbrooke got over the line against Liberal hopeful Sean Armistead by just 332 a votes, on a two-party preferred basis.

Mr Edbrooke had 50.47 per cent of the vote and Mr Armistead 49.53 per cent after preferences were distributed.

VEC figures show nearly 9 per cent of the 34,980 votes cast in the Frankston electorate had ballot papers incorrectly completed or not filled in at all.

Mr Armistead called firefighter Mr Edbrooke on Tuesday afternoon to concede defeat and wished his election opponent well in his new career as an MP.

He also took to Twitter to send a message to his erstwhile political rival.

Congratulations Paul on your success in #Frankston & the start of a new career. All the best ~ Sean. @paul4frankston pic.twitter.com/CpJNPXJkot

Mr Edbrooke was magnaminous in victory, calling Armistead “a gentleman throughout the campaign”.

@seanarmistead a gentleman throughout the campaign, will catch up for a coffee soon! — Paul Edbrooke MP (@paul4frankston) December 9, 2014

In a statement, the new Frankston MP said “many people spoke to myself and Labor volunteers and told us in their own words what our community needed to become a thriving city”.

“Labor has made some very large and positive commitments to the Frankston community which I will not waste a day in ensuring that they become a reality,” Mr Edbrooke said.

“Thank you for all your ongoing support as we hit the ground running to get some work done before the Christmas period.”

Incoming Premier Daniel Andrews has finalised his new cabinet to begin the work of government.

Mr Andrews said resolving the ambulance dispute and providing funds for TAFEs were top of his government’s agenda.

Congratulations to the newly elected Member for #Carrum @SonyaKilkenny All the best and good luck in your new role. pic.twitter.com/7W5bAaGnrn

Mrs Bauer said “I am grateful and feel privileged to have represented the Carrum electorate”.

“I have made many new friends, and have loved assisting hundreds of constituents and community groups with state government matters,” she said.

“Thank you to all that have assisted throughout my term, especially my wonderful family, my staff and a great team of volunteers.

“It’s been a remarkable journey and I now look forward to the next chapter in my life.​”

Ms Kilkenny won Carrum for Labor from the Liberals with a margin of just over 500 votes.