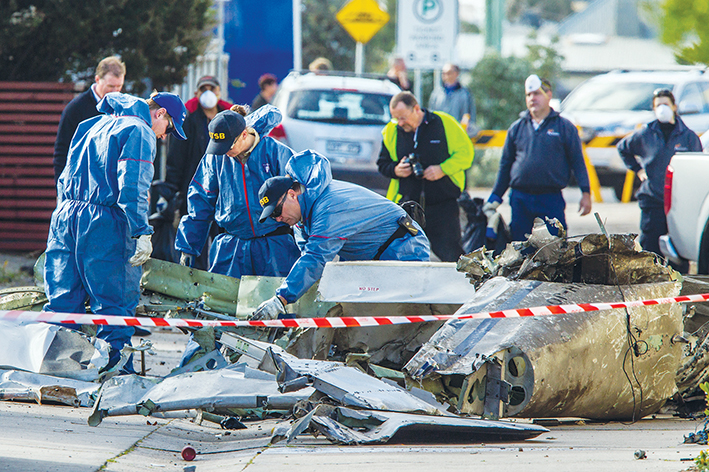 AIRCRAFT-related items found by members of the public were up to 3 kilometres from the site of a light plane crash in Chelsea two months ago.

The items were handed in to police and forwarded to the Australian Transport Safety Bureau, which is investigating the cause of the crash of the amateur-built Vans RV-6A on 14 October.

Experienced pilot John Stephenson, 77, died when the plane crashed into a laneway and house off Thames Promenade, causing chaos in the normally quiet neighbourhood.

A number of small post-impact fires were extinguished by panicked onlookers and the fire brigade. Several houses and cars were significantly damaged.

The fact that no one else was hurt is even more remarkable considering the plane crashed “in a significant nose-down attitude of about 35 degrees”, according to the report, and that wreckage was strewn up to 130 metres from the impact zone.

“Other CCTV security cameras at Chelsea captured the last seconds of the flight. Analysis of that footage confirmed … an aircraft speed of about 370 km/h leading up to the impact with terrain.”

Investigators found the propeller and engine 48 metres and 68 metres away.

They said the vertical and horizontal tail surfaces were separated from the fuselage and from each other and were scattered along the wreckage trail. The right wing and parts of the fuselage were 95 metres from the impact point and largely intact.

“The remainder of the aircraft, including the cockpit, was destroyed during the impact sequence. Items associated with the aircraft were located in the laneway up to 130 metres from the point of impact.”

After leaving Moorabbin airport at 1.20pm the plane was observed on radar climbing to 2900 feet and tracking south off the coast. After 1.32pm “no further radar returns were received”, the report said.

The report said witnesses saw the plane “descending rapidly” before hitting the ground eight kilometres south of Moorabbin. The pilot – with 1659 flying hours to his credit – was fatally injured.

Civil Aviation Safety Authority records show the aircraft was built in 1999 and first registered as an amateur-built aircraft in 2003. Mr Stephenson was its registered owner and operator.

The ATSB database reveals the aircraft had been involved in two previous accidents. In 2007 it suffered engine failure and was damaged during a forced landing. A new Lycoming IO‑360 engine was installed, the damage repaired and the plane “returned to flying status”.

In another landing accident in 2010 the nose wheel collapsed and the propeller hit the ground while the engine was running. It was replaced with another Lycoming IO‑360 engine, the damage repaired and the aircraft again returned to flying status.

Only a month before the fatal crash the plane’s engine caught fire while it was taxiing at Moorabbin. The ATSB report states that, after the blaze was extinguished, the pilot inspected the engine and associated areas, and reported to friends that there “appeared to be no damage as a result of the fire”.

It has been revealed that there was no emergency broadcast from the pilot, or evidence of any partial transmissions, open-microphone transmissions or over-transmissions during the flight.

The investigation is continuing and will include examination of the engine and propeller, cockpit canopy locking mechanisms, construction, maintenance and repair history of the aircraft, the viability of recovering additional data from the accident-damaged GPS units, and the pilot’s medical and flying history.

A CASA spokesman said the Vans RV-6A had no significant accident history. He said six fatalities from 1988-2010, considering all the variables involved in aircraft accidents, was “not disproportionate”.