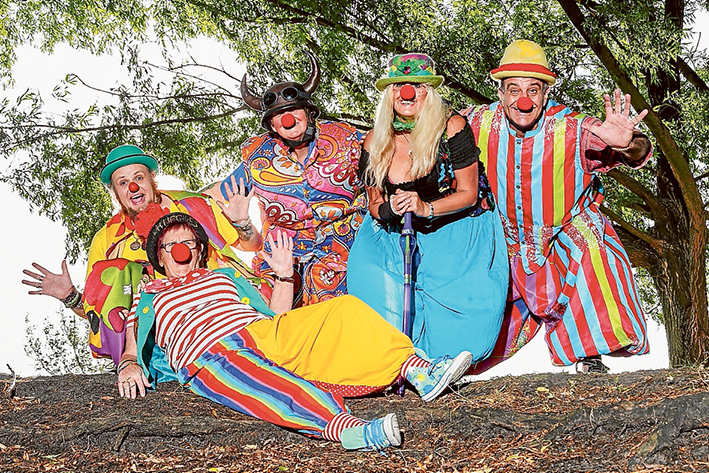 The charity group, which believes laughter is the best medicine to cheer up the ill and disadvantaged, is aiming to raise enough money to buy a Laughter Bus.

Chief clown Tim Webster said he had been diagnosed with leukaemia at a young age and “received a lot of community support” and this is the inspiration behind setting up the Humanitarians Clown group, which was granted official charity status in July last year.

The 33-year-old said he wants to “bring happiness to others”.

He visited Africa and in “a life changing moment” he saw some orphaned children playing cards and showed them a magic trick.

“They wanted to see more … I went to get more magic tricks and I walked out and there was about 150 community members so that was where the Humanitarian Clowns first started.

“It opened up doors and created a great environment.”

After years of clowning around all over the world, putting on shows to promote happiness, he and his mother Margueritte Flower were invited to work with the US doctor and clown Patch Adams, portrayed by the late Robin Williams in the 1998 film of the same name, in Costa Rica.

Pearcedale based Humanitarian Clowns has partnered with Peninsula Health to spread joy to local hospitals including The Mornington Centre for rehabilitation patients.

Now they hope to take their show on the road.

The group is planning to add a “meals on wheels” service while travelling around Frankston, the Mornington Peninsula, Kingston, Cranbourne and Dandenong.

“We’re hoping to get some welfare agencies on board the bus … and provide food to the homeless and boarding houses … we’ll have some music and instruments to make it a bit more fun,” Mr Webster said.

See gofundme.com/laughterbus for donation details or call Tim Webster on 0430 562 887. All donations are tax-deductible.