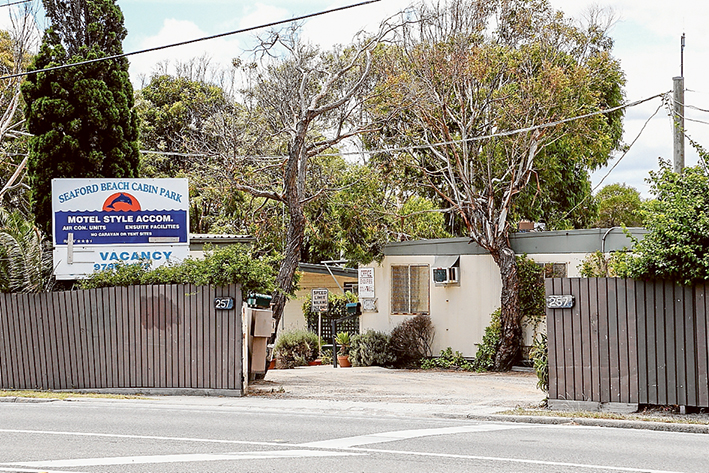 A DEAL to ensure the future residency of disadvantaged families and individuals at Seaford Beach Cabin Park could soon be sealed.

A long-mooted land swap deal – with a Crown land portion of the site, 860 square metres of land facing Kananook Creek, being exchanged with council receiving 675sqm of freehold land facing Nepean Hwy – has been dropped.

Mr Hibbert said he is working through the terms of the ten-year lease with his lawyer and there is still some “toing and froing” with council but he is confident most issues have been resolved despite having some reservations about the lease terms.

“They reckon they wanted to value it on a commercial basis … at the end of the day we’re pretty much dictated to.”

The lease was supposed to end in July last year but council extended it on an ad hoc basis until differences between Mr Hibbert and council could be resolved.

“They [council] want a $50,000 bond and they want me to pay double the rent, I don’t think they’ve made it exactly easy for me to continue on there but we will,” Mr Hibbert said.

Cr Glenn Aitken said it is clear Mr Hibbert is running a commercial operation and makes a profit from renting cabins to marginalised people at the Seaford cabin park.

Mr Hibbert has his own theory on why council may be “[making] it as difficult as they can for me”.

“My opinion is that they [council] dislike a cabin park. It’s regarded as a bit of slur on the economy of Frankston. They would really like it gone … [but] I have made a commitment to the people and there’s no reason why I would go back on my commitment.”

The cabin park owner said he had no intention of developing the site. Council rejected a planning application to build 51 units on the site two years ago.