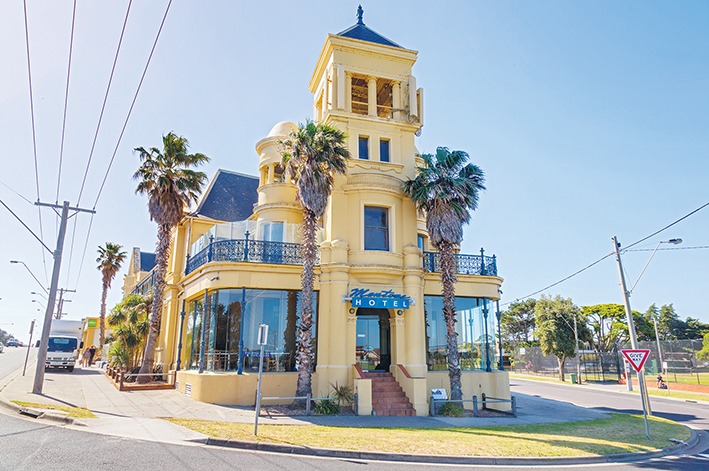 HOPES that the Mentone Hotel’s pub will be the same size when it reopens appear to be fading but live music and a smaller public bar could still be an option.

New owner and developer Paul Huggins has lodged a planning application with Kingston Council that shows five apartments to be built on the ground floor and seven on the first floor of the iconic building.

Mr Huggins, who bought the The Edgy early this year for a figure believed to be more than $9 million, had previously said he would try to find a retail tenant to manage “a scaled down place to eat and drink” on the ground floor of the venue.

An apartment block containing 58 dwellings will be built behind the hotel, also known as The Edgy at the existing carpark site.

The Momentum Developments founder told The News no suitable operator has come forward yet to lease the full 800 square metres of the lower level at The Edgy.

“My commitment was buy the hotel, restore the hotel, protect the hotel and offer food and beverages,” he said.

“I’m saying the worst case is we’ll end up with 250 square metres of a small [pub] offering downstairs at least there will be something.”

The developer said if a suitable pub manager can be located he will remove the five apartments from the ground floor plan.

He said he is committed to providing a stage for live music at the venue although it may not feature a full band “in 200 square metres of bar”. Entertainment may be limited by space.

Save The Edgy spokesman Chris Hill said the group, established to try to stop the hotel being totally converted into apartments, would be meeting Mr Huggins on Wednesday evening (15 July) to discuss the submitted planning application.

Kingston mayor Cr Geoff Gledhill will also attend the meeting and said he would answer questions as best he could at such an early stage of the planning application process.

“Now that an application has been lodged, I’m going to the meeting to listen mostly to what is being said,” Cr Geoff Gledhill said.

The mayor said he is happy to engage with the community over the future of the Mentone Hotel at each stage of the planning process and appreciates the high public interest in the redevelopment plans.

Council issued a statement last week noting: “The proposed development for the Mentone Hotel cannot proceed unless approval is granted from Kingston Council, the Minister for Planning and the Heritage Council of Victoria.”

Planning Minister Richard Wynne announced last month that the hotel had been officially listed on the Victorian Heritage Register (‘Mentone Hotel heritage listed’, The News 24/6/15) but this listing only protects the facade of the main building and the internal staircase.

Council officers will consider the planning application for apartments lodged by Momentum Developments and will provide advice before councillors vote on the proposal at a future council meeting.

If public exhibition of the plan is approved, community feedback will be sought by council.