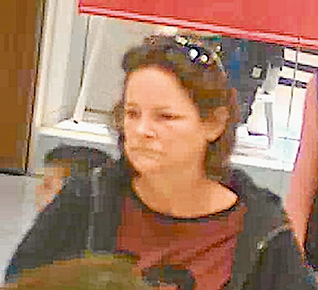 POLICE have released a still image of a woman they wish to speak to regarding 10 instances of theft by deception, mostly at Bayside Shopping Centre, soon after 11am, Thursday 25 June. She is in her 40s, dark hair, medium build, wearing a maroon tea shirt and dark top.

Detective Senior Constable Richard Brown, of Frankston Crime Investigation Unit, said the woman was suspected of using a stolen credit card to buy groceries, jewellery, clothing and liquor valued at $854 at five stores at the complex and in Young St. He said the credit card was used to make the payWave transactions all under the $100 limit.

The victim, a 37-year-old Hastings woman, reported her purse missing after she left it on the top of her child’s pram. She had other young children in tow.