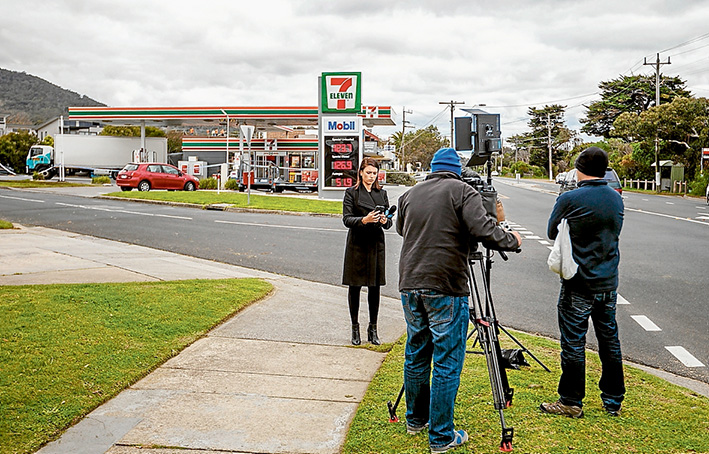 Terrified attendants feared they could be killed in the 3.07am and 3.30am raids, which were both captured on CCTV footage. The two men were being counselled late last week as they sought to come to grips with the nightmare events.

Police will allege that in the first robbery three balaclava-clad bandits ran behind a customer into the 7-Eleven at the corner of Pt Nepean Rd and Sixth Av, Rosebud.

A lone, 35-year-old male attendant looked up to see the offenders, also wearing hooded jumpers and bandanas, rushing to the counter – one brandishing a handgun and another carrying an axe.

The offender with the axe and the unarmed offender allegedly jumped onto the counter and climbed through security wire, while the gunman stood in the customer area, pointing his gun at the attendant as well as the customer, who was crouching on the floor between shelving and a freezer.

The two behind the counter ransacked cupboards and filled up a bin with cigarettes and cash from the till.

The gunman also threatened the customer, who was still crouching on the floor.

Police believe the bandits parked their cars on Sixth Av, walking through an area behind the store, and followed the customer inside.

The trio is also believed responsible for the 3.30am armed robbery at the 7-Eleven service station, in Point Nepean Rd, Dromana.

In a similar raid, the lone male store attendant was confronted by three offenders, one with a handgun. Two other offenders again went straight to the counter and climbed through security wire.

With the gun pointed at his head the attendant was pushed into the staff area and forced to open the till. The offender with the axe smashed a window near the till and stole an undisclosed amount of cash. The other two offenders used a bin to carry off their haul.

The one with the axe –described by police as the “most volatile and violent” of the three – smashed a computer monitor in the manager’s office, struck the wall and again hit the window.

They said the offender with the firearm appeared “more in control” throughout both incidents. The offender lost his balance and fell over after becoming entangled in security wire on the counter.

The offenders are believed to have used a grey or silver V8 Commodore sedan and black SUV in the raids.

Anyone with information can call Crime Stoppers, 1800 333 000, or report it to crimestoppersvic.com.au