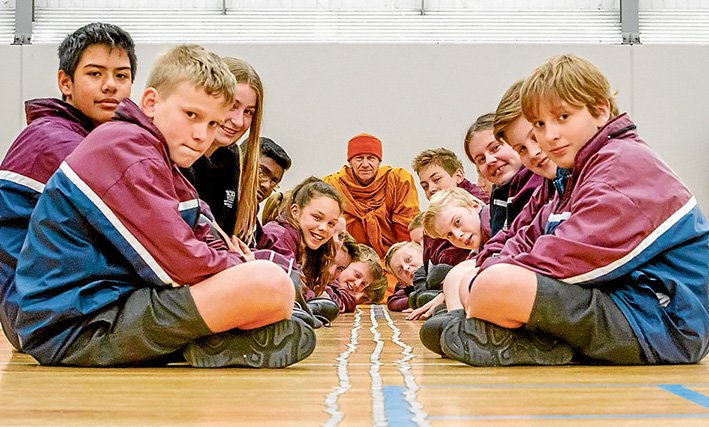 We are talking big money, too: The students raised more than $1000 – with office staff needing several trips to take the heavy load to the bank, teacher Janet Mitchell said.

The event was supported by Buddhist monk The Venerable Terry who is collecting good quality, used textbooks, as well as fiction, for orphanages, schools and universities in the African and Asian countries.

Ms Mitchell said the school has been involved in the program for four years. “Exercise books are a luxury in both places and few kids get them, so we had a fundraiser at the school to raise money to buy exercise books to send over,” she said.

“The competition between years 7 and 9 form groups involved a silver coin challenge. The students had to collect five cent pieces and other silver coins and lay them out in a straight line in the basketball stadium. The longest line won.

“It was a close competition – but the real winners will be the kids in those countries who will receive an exercise book, pencil and eraser. This will allow them to erase the pencil marks and reuse the book when it is filled. Our kids were brilliant and extremely enthusiastic.”

“I have discussed with you the various and consistent challenges that our people regularly face back home, especially when it comes to dealing and struggling with education needs and other health related matters,” he said.

“The contribution that you have made towards this noble initiative will be immensely appreciated and will be provided to the desperately needy people of Somaliland, who are extremely in need of, and will forever cherish, this wonderful opportunity.

“The Somaliland schools and universities need more help than ever before, and any further assistance provided by your school or perhaps any other networks, will be deeply appreciated.”