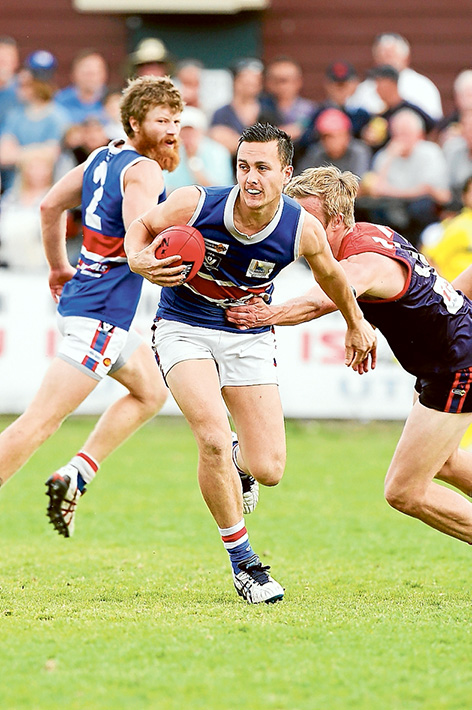 MORNINGTON will play Frankston YCW in the 2015 Peninsula Division grand final for the second year in a row after smashing old foes Mt Eliza by 48 points on Sunday.

The Doggies were simply too committed for the Redlegs, who looked as though they would have preferred to be somewhere else other than Kars St in a Preliminary Final.

Mt Eliza were pathetic and gave up without a whimper. If it had not been for Sam Gill, Darren Booth, Karl Lombardozzi, Matt Little, Jimmy Clayton and James Anwyl, they would have been belted by far more than eight goals.

Mornington came out with intent and a desire to play in a grand final. You could have been forgiven for thinking Mt Eliza didn’t care if they got there. The Redlegs kicked three goals in the first half and just two in the second. Mt Eliza averaged 17 goals a game in 2015.

When you have a full forward like Justin Van Unen, who has kicked more than 100 goals in a season, it’s difficult to understand why he started on a wing. If it was to shake Adam Symes as an opponent, it was naïve by the Mt Eliza brainstrust. Symes is comfortable wherever he plays and was more than happy to stand with Van Unen on the wing. He was far too good for him wherever he played.

James Cameron set the game up for the Doggies with six possessions in the first quarter and 21 for the match. He also booted two goals.

Joel Miller and Ben Wells (two goals) didn’t get a possesion in the first quarter but dominated after that, while Ben Clements was busy all afternoon with three goals.

Jackson Calder just works so hard and wills himself to contests. This attitude is usually rewarded with opportunity and he finished with four goals.

Danny Nolan and Emilio Bitters were back in the side and got better and better as the game went on. Coach Chris Holcombe said before the game that he expected Warwick Miller to play in the grand final.

Michael Gay was dominant in the ruck while Dale Nolan was comfortably the second best player on the ground, playing as a defender. He would have had more than a dozen marks.

While Symes carved up Van Unen, Ryan Smith and Jai Haddock had the ball on a string from half back, while Ryan O’Dell, Josh Halsall and Barry Smeeton did a lot of the grunt work.

Yet again, it wasn’t the prettiest of games, however the Doggies were the side that wanted to win.

If you were a Mt Eliza supporter, you would have left the ground very disappointed.

Obviously, the Doggies’ fans loved it and they are into yet another Grand Final.