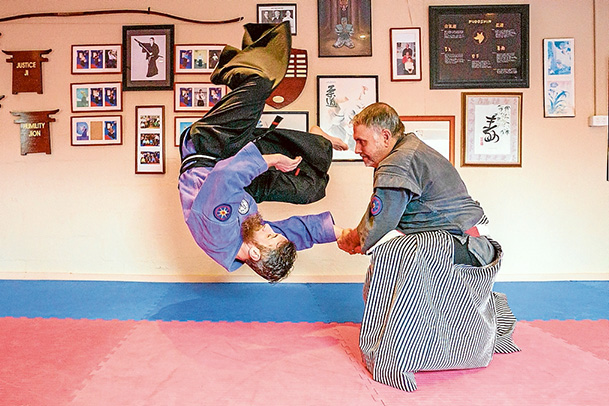 Soke it to him: Tony Ball, right, shows off one of the many expert karate moves that have led him to being honoured in the Martial Arts Hall of Fame. Picture: Yanni
Share
Facebook Twitter LinkedIn Pinterest Email

SEAFORD dojo martial arts instructor Soke, Tony Ball, has been honoured with an induction into the Martial Arts Hall of Fame last month.

Ball has been training and has trained many others in martial arts called Fudoshin Ryu Bujutsu, a blend of aikido, kung fu, judo, jujutsu, weaponry and karate, with a focus on the unity of the mind, body and spirit.

“This has been a long time coming. Soke Tony Ball has been involved in community work for many years including the ground work for the martial arts therapy program taught in many Victorian schools now,” Senpai Hosking said.

The school plans to open a second dojo in Aspendale soon.