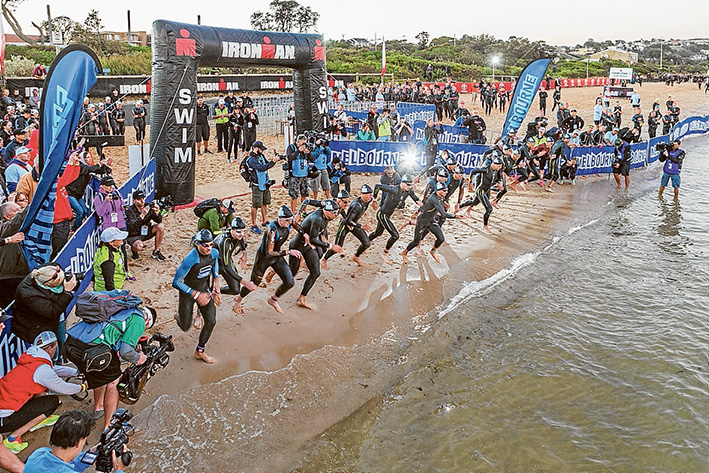 NEXT year’s Ironman Asia Pacific Championship race has been cancelled and Frankston Council fears the region’s economy will take a multi-million dollar hit as a result.

Race organisers blamed a scheduling conflict with the Melbourne Grand Prix on the same weekend of 17-20 March as the reason to pull the pin on the swim, cycle and run triathlon but authorities say both events could have been accommodated.

The annual race, held in the south east of Melbourne, begins in Frankston and ends at St Kilda with the bike stage taking place along Eastlink after the swim stage at Frankston.

In a statement last Thursday (29 October) World Triathlon Corporation Asia Pacific CEO Geoff Meyer said the cancellation was due to “challenges that have arisen due to a scheduling conflict with another major event in the Melbourne calendar”.

The Australian Formula One Grand Prix was originally scheduled to be held in Melbourne on 31 March-3 April but was moved to 17-20 March.

“Holding both events on the same day was explored; however, the impact on the city, surrounding communities, roads and emergency services was not manageable for an event to be delivered in Melbourne to the level required for our athletes’ safety and satisfaction,” Mr Meyer said.

“This annual international event brings wide-reaching benefits to local businesses, on both the day of the event and ahead of the race. It attracts 15,000 spectators and 2,500 competitors to Frankston City, who contribute an additional $2.2 million to the economy.”

Cr Mayer said council had notified the Ironman race organisers that the entire event could be hosted in the Bayside region to avoid traffic clashes with Grand Prix attendees.

“This would turn a potential issue into an opportunity that would benefit the south east Melbourne region.”

Frankston Labor MP Paul Edbrooke said he is “bitterly disappointed” World Triathlon Corporation decided not to proceed with next year’s event. He understood competitor registration numbers were lower than expected for 2016 compared to previous years.

“The organisers were presented with a range of options, including changing the route so the event finished in Frankston, but they’ve nonetheless decided to cancel the event for commercial reasons,” he said.

A spokesman for Sports Minister John Eren said there was no logistical reason to cancel next year’s Ironman event.

“This is a commercial decision made by the World Triathlon Corporation and is not due to a clash with another event,” spokesman Patrick Lane said.

“Victoria is more than capable of hosting the big events side by side at the same time – our track record proves it.”

The triathlon was first held in 2011 and next year was the final race before  the partially taxpayer funded event’s contract was due for renegotation.