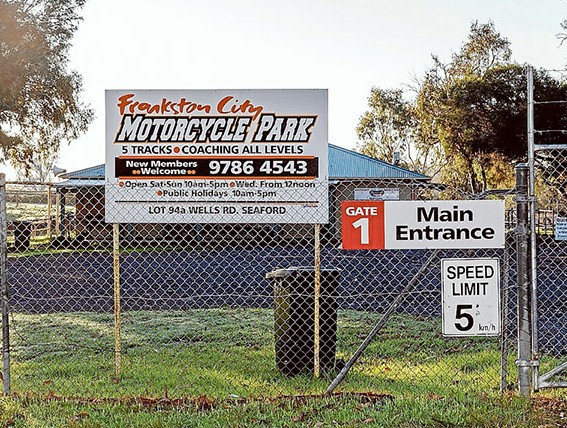 Tracks to reopen: The Frankston Motorcycle Park will be open again after the facility was shut in April following a fatal collision on the main track. Picture: Gary Sissons
Share
Facebook Twitter LinkedIn Pinterest Email

THE Frankston Motorcycle Park is open to motocross riders again. The gates were opened up again for access to the tracks this month.

Frankston Council, the Frankston City Motorcycle Park Club and Motorcycling Victoria agreed that MV should oversee the park’s operations for an 11-month trial period, starting this month, after the death of 25-year-old Danny Edlington in a collision on the main track in April.

The motorcycle park was shut down by council, as landlord of the premises, for several months until agreement on the future running of the facility could be reached.

Motorcycling Victoria CEO Wayne Holdsworth said the body had “developed a good relationship” with council and the club committee members.

“Whilst we don’t have the level of experience that the Frankston City Motorcycle Park Club have in managing such a facility we do still have significant experience in this space and feel suitably qualified to provide more than adequate processes and programs to see the park develop and run with an improved safety and efficiency,” Mr Holdsworth said in a statement issued last week.

“Subsequent to the dreadful accident that occurred over Easter 2015, MV were contacted by Frankston Council to guide them on what the next steps should be and what we felt was the best outcome for all.”

Mr Holdsworth hit out at “keyboard warriors” who criticised MV during the protracted negotiations to reopen the park.

“Just for the record, the social media posts had no influence whatsoever in MV’s decision to
guide the parties through this situation. Genuine, responsible and respectful representation and discussions by people do, however, make a difference.”

He noted: “Whilst we understand that the governance that is now in place at the facility seems to some as draconian, this is our only means to mitigate the risk attached to this sport. We make no apology for trying to make this sport as safe as we can consider the risk associated with it.”

The MV chief thanked club president Ralph Ridley and committee member Paul Finley for their “outstanding” work over the past few months to have the park reopened.