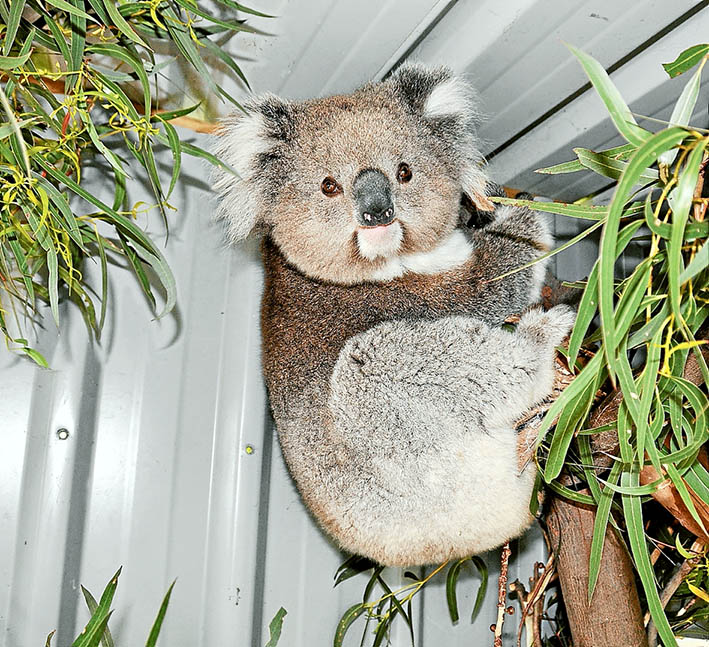 AN unexpected visitor dropped in to central Frankston last week. A koala was removed from a garden in Jolly St on Wednesday (2 December) after Animalia Wildlife Shelter rescuers were called out by a homeowner concerned for the animal’s welfare.

The female koala, named Jolly by shelter staff after the street she was found in, is now safely booked in for a short-term stay at Animalia’s shelter at Kenilworth Ave. Wildlife shelter president Michelle Thomas says koalas are increasingly wandering into suburban streets in Frankston and need to be protected.

Ms Thomas said koalas travel along Cranbourne Rd to the Royal Botanical Gardens in Cranbourne and eat leaves from gumtrees in the dividing lanes of the freeway on their way through. Koalas can travel up to 10 kilometres per day or night, according to Ms Thomas, but do prefer to be on the move under cover of darkness.

Koalas are increasingly seen crossing Cranbourne Rd in Langwarrin near the Busy Bees Plant Nursery, even during daylight hours, and Ms Thomas urged motorists to look out for the furry travellers while driving through the area – mainly at the Kelvin Grove intersection but also along Dandenong-Hastings Rd near Browns Rd.

It is the height of the breeding season for koalas and Ms Thomas reckons Jolly may have been on the move to avoid the unwanted attentions of frisky males. She said males also move out of their usual routines and areas to avoid competition with older males during breeding season. Jolly’s age is uncertain.

The wildlife rescuer says it may be time for “climbing poles” to be installed in housing estates where koalas are beginning to roam. She said such poles have been erected in “koala zones” in NSW and Queensland housing estates since the marsupials often cannot climb out of a garden if they get in.

“They’re at risk of attack from dogs … if there’s two dogs in a backyard they can rip a koala apart,” Ms Thomas said.

Jolly will thankfully spend a few days living a life of luxury at the wildlife shelter before she is released back into the wild, possibly in the Sweetwater Creek Nature Reserve which may have been her ultimate destination on her journey.

Anyone who sees a koala in their garden in central Frankston or Langwarrin should call the Animalia Wildlife Shelter and Rescue service on 0435 822 699 so the animal can be removed for its own safety and released elsewhere.