Yabbies sink away from pond 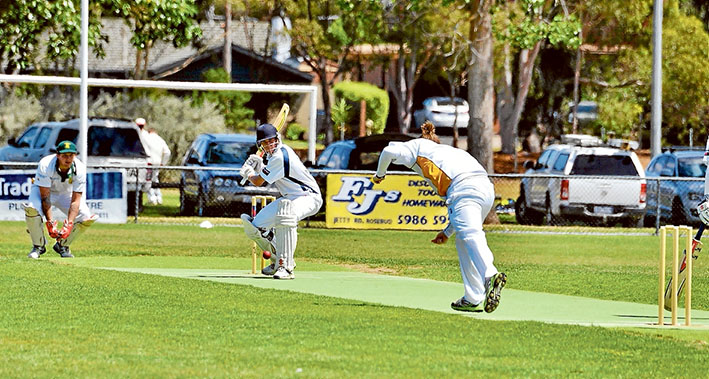 Hastings will be digging deep for the win when it begins day two against Tyabb this Saturday. As the visitors, the Yabbies didn’t fare so well outside the familiar surroundings of the pond. The visitors lasted just 34.3 overs in their first innings and were bowled out for 55. Michael Edwards top scored with 14.

16-year-old Ryan McNamara was sensational for the Blues in only his third First XI game. McNamara bowled seven overs and finished with the impressive figures of 5/21. Luke Hewitt snared 2/2 and Mitchell Floyd 2/11 from 12 overs.

The Blues didn’t do much better with the bat, managing 92 in pursuit of quick runs, although Al Kristensen’s 39 did help. The Yabbies are 3/21 in their second innings, still 16 runs behind. Floyd picked up another couple of wickets.

Mark Snelling smashed a brutal 180 runs for Carrum Downs in their match against Frankston YCW. Snelling hit 22 fours and five sixes in his innings, while Nathan Phillips scored 58 and Ryan Lynch 43. The Stonecats will be chasing 342 for victory this week after the Cougars finished on 6/341.

Rosebud has set Tootgarook 240 for victory after scoring 239 on Saturday at Olympic Park. Billy Quigley hit a high score for the Buds with 42 and Brad Glenn hit 34. Zac Stevenson was the pick of the Frogs’ bowlers with 4/85.

Dromana will be looking for an outright victory against Ballam Park. The Knights were obliterated after just 95 runs, with Aaron Kaddatz taking 3/32. The Hoppers will resume at 6/152 after Darren Kerr made 41 and Jack Fowler 25.

The match between Balnarring and Skye will go right down to the wire. The Saints batted first on Saturday and made 179. Mitch Kleinig top scored with an unbeaten 6, while Pat Clinch claimed 5/37 for Skye. The home side is currently 2/39 in reply.