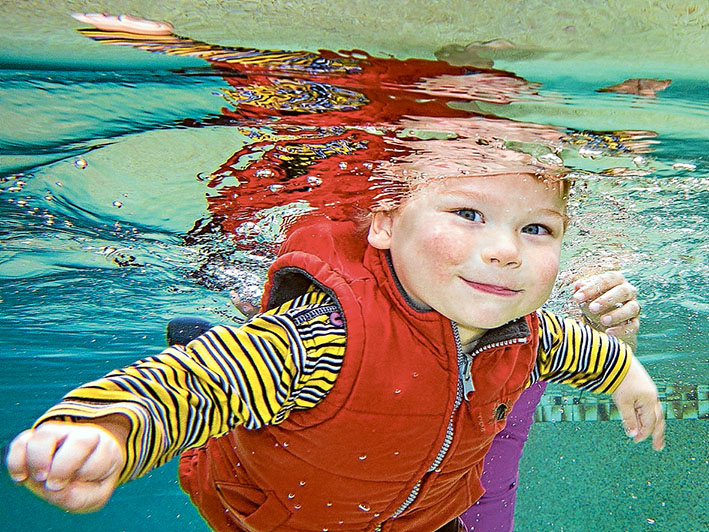 She teaches tots from six months to five years the skills to save themselves from drowning – and also to enjoy their time in the water rather than being frightened by it.

Watching fully clothed toddlers floating and swimming in what’s become a familiar environment to them, gives parents peace of mind,

knowing that their children are capable of surviving an unexpected plunge.

With drownings our biggest preventable killer of young children, the need for survival skills is obvious. “We would never put a young child in a car without a proper car seat,” she said.

“So we should never let children near water without ensuring they have the skills to save themselves in an emergency.” Ms Minakov said children do not find water scary when they can manipulate their environment and feel they are in control. “We teach them in such a way that saving themselves becomes a reflex action – that they’ve ‘seen it all before’ and there is nothing to be afraid of,’’ she said.

“They learn to have the confidence to cope and to get themselves out of trouble.”

Her charges are taught to be comfortable opening their eyes under water without goggles and to swim fully clothed – as they would have to in an emergency situation.

Once in, they dog paddle towards the nearest exit point for three or four seconds, and then roll over on their backs for a rest, before continuing. They do this for as long as it takes to get to safety. Ms Monakov trained for six weeks, four hours a day, to learn her survival techniques. She teaches children one on one at what she says is the first survival-swim school in Melbourne.

Classes are held five days a week for six to eight weeks.

“All the kids have different personalities and some don’t like water, but most do come to love it,” she said. It could be the difference between life and death.