Sky rail ‘not ruled out’ 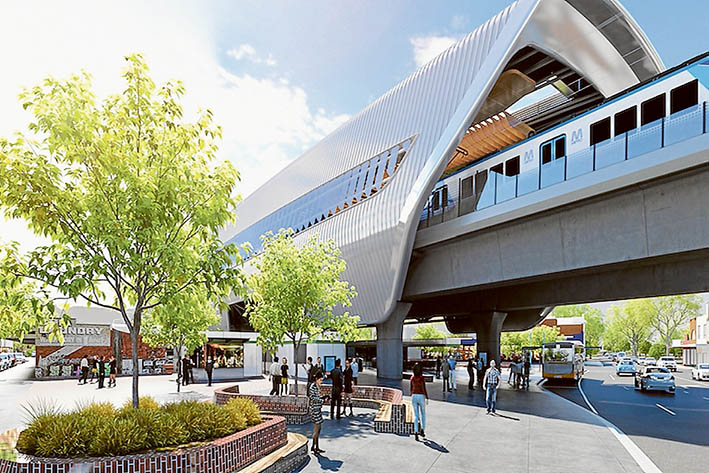 THE state government has declined to dismiss the possibility of a sky rail along the Frankston line as part of its plans to remove eleven level crossings.

Labor Public Transport Minister Jacinta Allan was asked in Parliament last week by Liberal shadow public transport spokesman David Hodgett whether the minister will “now categorically rule out future sky rail ever being considered for the Frankston line. Yes or no?”.

Ms Allan said the government “will be taking the advice of the experts and the engineers on what is right for each location” and accused Mr Hodgett of “scaremongering” to try to stop Labor separating road from rail at level crossing intersections to ease congestion.

“I cannot find, and Melburnians cannot find, any record of the former Liberal government during its four years starting and finishing one single level crossing,” Ms Allan said.

“For four long years it did nothing about one of the most important ways that we can reduce road congestion and run more trains.”

The exchange about elevated rail in Parliament came after the state government announced last Sunday (7 February) that a nine-metre-high elevated rail track will be built along sections of the Cranbourne-Pakenham line as part of a $1.6 billion project to remove nine level crossings.

The weekend announcement sparked anger among some homeowners and residents along the Cranbourne-Pakenham line about a lack of community consultation before the sky rail option was finalised. They believe elevated rail will be an eyesore and noise from passing trains will rise.

Frankston councillors have so far opted not to get involved in talks with the state government over any possibility of sky rail along the Frankston line, feeling it is too early to address any concerns over elevated rail since no detailed plans have been released yet (‘Sky Rail a future fight’, The Times 8/2/16).

Upper House South Eastern Metropolitan region Greens MP Nina Springle wants the government to clarify who will pay for “the construction and upkeep” of new open spaces created by the construction of Sky Rail in the south east.

“I have met on a few occasions with local residents’ groups about issues of public open space, which is a perennial issue in the south east,” Ms Springle told Parliament.

“The plans released on Saturday [for the Cranbourne-Pakenham line] would create the equivalent of 11 MCGs of open space for communities.

“The possibility that local councils might be forced to pay for the construction and upkeep of these open spaces, especially with rate capping to commence in July, is of concern.”

An office of the Victorian Government Architect report, lodged as part of a Victorian Design Review Panel series, last year stated “lowering a section of the rail corridor under an at-grade road is the most supportable solution in most circumstances”.

Nearby waterways, such as those at the Frankston end of the Frankston line, can however make it logistically impossible to opt for a rail under road option involving the digging of vast trenches.

While Ms Allan refused to confirm whether elevated rail is under consideration for the Frankston line, she did say Labor MPs Paul Edbrooke (Frankston), Sonya Kilkenny (Carrum) and Tim Richardson (Mordialloc) “are excited about this opportunity to have a conversation with their communities based on the expert advice of engineers and the experts”.

“Indeed the member for Frankston tells me that people in the last day or so have been saying to him, ‘Just get on and get rid of these level crossings’,” Ms Allan said.

Level crossing removal works have begun at Ormond, McKinnon and Bentleigh. The rail line is being lowered and the train stations are being rebuilt at the three sites.