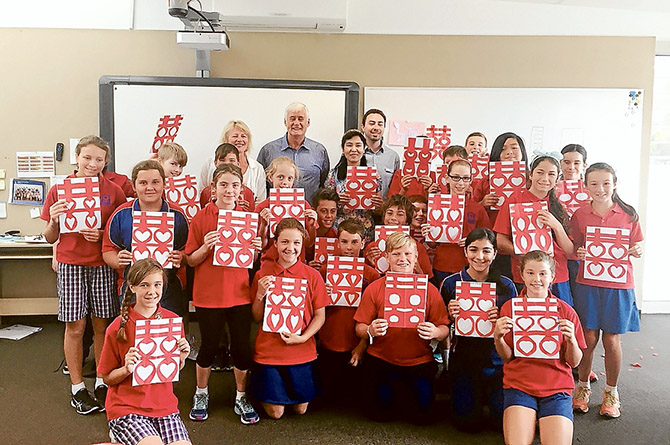 The artists were invited by principal Phil Anthony to demonstrate their special talents. Pupils in Class 6B were shown the art of paper cutting by Ning Cui, who has won many awards in Chinese and international art competitions. Her paper artworks are collected by admirers from around the world. They include detailed portraits of famous people, as well as more traditional Chinese-style art.

The pupils were taught how to fold and then cut paper to create Chinese characters which symbolise good luck and are often displayed on special occasions.

“This exercise was fitting considering it was the first day of the Chinese New Year, organiser Ms Wu said.

“The pupils had a great time learning from a master of paper cutting and were all pleased with their results, many taking them home to show their families.”

Afterwards, gifts were exchanged, with the Chinese artists receiving school brochures as mementoes of Australia.

“More and more emigrant families are coming to Australia,” Ning Cui said. “Choosing a good school and educating their children is a top priority. Understanding how to keep their own national culture alive while assimilating into Australian cultural life is important for their future.”

Ning Cui – who has a child at school in China – said she was confident both countries will blend educationally. “In China, students are challenged by heavy homework every day and can become unhappy. They lose their enthusiasm at that age, but here in Australia, I see happy smiles everywhere. They are eager to study in Australian schools.

“I am so happy to see the Mandarin course introduced into an Australian primary school. That means Australia is a real multicultural country.”

Australian-Chinese Cultural Association of Trade Exchange president Heyi Chen said: “As an Australia-Chinese association, we want to ‘build a bridge’ to promote the cultural exchanges between the two countries and introduce more Chinese traditional culture to Australia.”