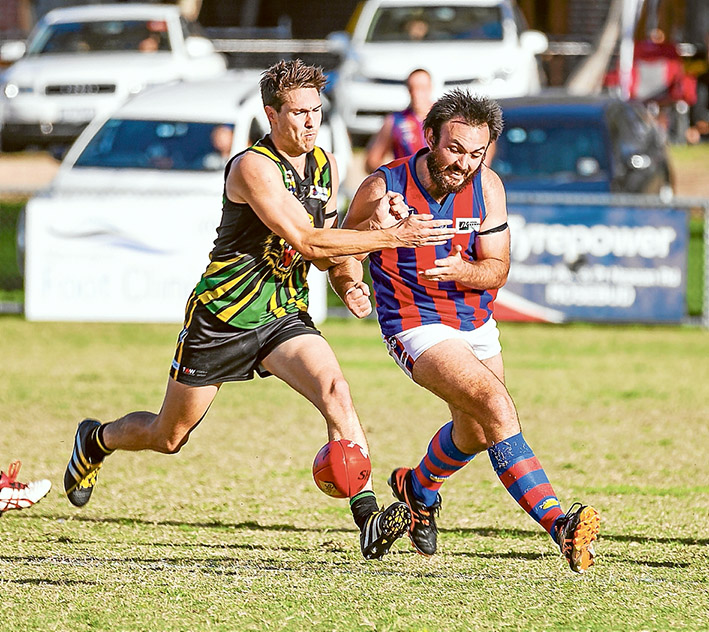 THE ANZAC Round of football in Nepean League was soured on Saturday when Tyabb midfielder Adrian Clay was airlifted to hospital.

At the 30-second mark of the third quarter in the match between the Yabbies and Sorrento, Clay had his head over the footy and was about to pick it up when a teammate came hard off the square and accidentally hit him in the head.

Clay laid motionless on the ground as trainers attended to him.

The game was called off a short time later as it was obvious that further medical attention was required to assist the midfielder.

Just before the air ambulance arrived to take Clay to hospital, he started to regain feeling in his legs.

The news the following morning (Sunday) was even better. The club confirmed that initial scans had appeared positive, although he would require further testing.

Sorrento coach Nick Jewell said it was a worrying time for everyone at the ground.

“It was certainly a strange feeling but everyone was just concerned about Adrian and hoping that he was OK,” Jewell said.

Before the game was called off, Sorrento was in total control.

The Yabbies did well to hold the Sharks in the opening quarter (3.5 to 0.1) and early in the second, however, the floodgates opened at the seven minute mark of the second quarter.

The Sharks booted seven goals in 23 minutes with Luke Tapscott adding two more to his two first quarter goals and Nick Corp dominating also with a couple of goals.

Tyrren Head was also enjoying his best game of the season.

The Yabbies didn’t kick a goal in the first half, such was the strong defensive pressure of the Sharks.

Josh Connell and the in form Luke Rigg were getting their hands on the footy and Scott Torpy was continuing his good start to the season also.

When the game was called off though, everyone quickly forgot about the first hour of the game.

Down the road at Pier St Oval in Dromana, the home side won its second game of the season, knocking over Rye by eight points in a thriller.

Four goals to Beau McMurray in the third quarter got the Tigers’ tails up again after they trailed by 21 points at half time. The home side booted six goals to two points in the third to lead by 18 at the last change.

To that point in the game, 15 of the 16 goals had all come from the Mt Martha end of Pier St oval. Rye was kicking with the advantage in the last.

The Demons got within two points of the Tigers with just two minutes remaining, however, a mark and conversion to Dromana’s Beau Cosson with 55 seconds on the clock sealed victory.

Billy and Jackson Quigley were outstanding for the Tigers while Mitch Gill-Furness was unquestionably their best four quarter contributor.

Ryan Mullet was clearly the best player on the ground for the Demons with 41 possessions while Kris Bardon wasn’t too far behind with 38 touches.

The challenge for the Tigers now is to find consistency in the kids – they have to shorten the gap between their best and their worst. It will come with experience, however, wins against Sorrento and Rye should give them enormous confidence that their best is good enough.

On Sunday, Rosebud continued its up and down season, inflicting Red Hill’s first loss of the season.

The Buds opened well, got their noses in front and held their opponents at bay for the duration of the match.

In the other Sunday match, Devon Meadows ended the season of Crib Point.

The Meadows held off an early onslaught from the home side before working their way into the contest, taking control and winning comfortably.