No booze cruise for PM 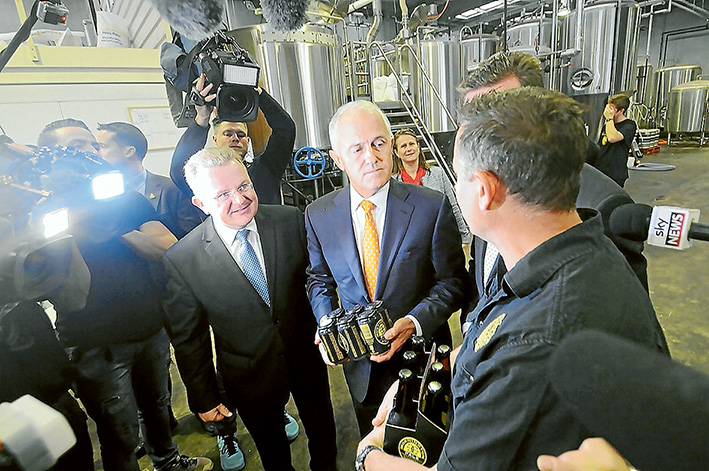 A LIQUID lunch was not on the breakfast menu when Prime Minister Malcolm Turnbull visited the Mornington Peninsula Brewery in Mornington while on the election campaign trail late last week.

The Times was not notified of the Prime Minister’s trip to Mornington but managed to scramble an agile photographer at no notice to cover the visit.

Mr Turnbull and a busload of political staffers and Press Gallery journalists briefly dropped into town on Thursday morning (12 May) to be entertained by Liberal Dunkley MP Bruce Billson who took great delight in showing the press corps around the brewery while extolling the virtues of free enterprise and emerging export markets for the peninsula ale.

The media throng was so enraptured by the Bruce Billson show that Liberal candidate Chris Crewther seemed somewhat sidelined from the spotlight.

The Liberal candidate and Mr Billson did manage to engage in a bit of jocular banter for the cameras though.

“He’s more handsome, svelte, taller and has less kilometres on the clock,” he said.

After half an hour or so of touring the brewery, the prime ministerial bus departed and headed to a Moorabbin engineering company.

An angry single mother ‘Melinda’ confronted Mr Turnbull in Moorabbin about cuts to family tax benefits and the rising cost of education.

“The cost of school is going up and up and up and yet we’re not getting any more money and now you’re going to take the family tax benefits away. It’s not just single mums you’re hurting,” she said.

The Prime Minister said he understood how tough it can be bringing up children as a single parent.

Perhaps he wished the Mornington Peninsula Brewery was scheduled after the Moorabbin bus stop so he could have a post-confrontation drink.

Although he could have cracked open a can of Mornington Pale from the slabs of beer handed over to the accompanying journalists earlier in the day by the teetotal Mr Billson.