Sharks to fight to be number one 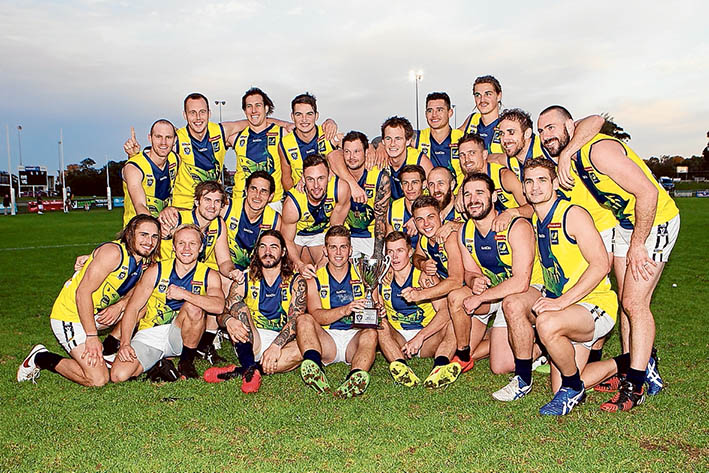 THE MPNFL Sharks will play Geelong FL next year in a bid to claim the title of the best league in Victoria after beating Northern Football League on Saturday.

Eastern Football league and Geelong Football league were considered the best two sides in the state and went head to head at Geelong on Saturday. The home side was convincing in its victory in that match.

The MPNFL Young Guns side travelled to Healesville to tackle the Yarra Ranges, however, despite a gallant effort, went down by 10 points in the end.

The main game at Rye didn’t attract much of a crowd but the football was quality.

The locals went into the clash without the likes of Anthony Barry (was made to play at Western Bulldogs in the VFL), Luke Tapscott (neck), Rohan Heasley, Scott Simpson and Shane McDonald (all for various reasons) while Hastings’ Luke Hewitt was the emergency.

Frankston YCW’s Scott McLeod was a late call up and his pressure was outstanding throughout while Dromana’s Christian Ongarello replaced Barry and he was one of the Sharks’ best.

The home side got off to a slow start and trailed by 10 points at the first change.

The visitors appeared to be more organised, always seemed to have a loose player behind the footy and when the ball went forward, they looked dangerous with their tall timber.

Sharks’ coach John Hynes told his charges that ‘composure’ was required, especially moving the ball into the dangerous 50 metre arc.

Hynes was also pushing home the fact that the side who pusher harder for longer would prevail in the end.

The Sharks’ pressure was good for the first 20 minutes of the first quarter but a lapse in concentration saw the visitors kick three quick goals.

The second quarter belonged to the Sharks, booting 8.3 to 3.1 to grab the momentum and take control of the match.

Dylan Jones, who took the honours in the ruck with great support from Beau Hendry, started to get his hands on the footy and the likes of Kyle Hutchison, Dale Sutton, Ryan Santon, Tim McGennis and Luke Potts started to win the ball out of the middle and at stoppages.

Pines teammates Tim Bongetti, Aaron Edwards and Guys Hendry, combined with the likes of Dan Gormley, Jimmy Cameron, Anthony Bruhn, Paul Minchington, Beau Cosson and Justin Van Unen, were a real handful in attack for the Sharks and the opposition was well aware of the forward power going into the match.

“If we allow the MPNFL repeat entries into their forward half, I’m not sure how long our inexperienced backline will be able to hold them,” Hyde said.

“You are very potent up forward with Bongetti, Van Unen and Edwards and we just can’t give them opportunity to get their hand on the footy,” he said.

On the other side of the coin, Hynes was more than happy with his back six and thought this was where his side could win the game.

Hynes proved to be right. The likes of Brenton Credlin, Rikki Johnson, Byron Barry, Warwick Miller, Kevin Lylak, Ongarello and the smooth moving Paul Rogasch controlled the back half of the ground.

The back line controlled the tempo, worked very cohesively and moved the ball with purpose from the defensive half of the ground.

The midfield ran and spread well and the forward half was very organised with the likes of Cosson, Bongetti, Bruhn, Hendry and Van Unen all working hard up the ground to provide a target for those coming out of defence.

Hynes wanted his side to work harder for longer and that’s exactly what they did, despite mini spurts from Northern.

The MPNFL kicked the first two goals of the third before Northern booted three in six minutes to get within 15 points at the last change.

Northern kicked the first of the last to reduce the margin to nine points before the Sharks booted the next three and iced the game.

Luke Potts was awarded the Best Player award from the opposition.

A goalless third quarter was the difference between the Sharks and the Yarra Ranges.

The Sharks, all under the age of 24, were just two points behind at half time before the home side booted three goals to a behind in the third.

Ryan Marks-Logan, who has been outstanding for Frankston Bombers this season, carried that form into the interleague clash, while Tyabb’s Ethan Rahilly and Somerville’s Adrian Speedy were also superb through the middle of the ground.

In defence, Red Hill’s Jonah Siverson worked hard while the likes of Langwarrin’s Blake Harkness and Somerville’s Rohan Hogenbirk were tireless through the middle.

It was a mixed bag for the Under 19s with the Nepean Division side winning comfortably and the Peninsula Division side going down.

Where the MPNFL did get it wrong however, was playing Nepean League in Healesville and Peninsula League at Rye.

It will be a combined side next season.

In the other game, Northern Football League were far too strong for Peninsula, winning 23.13 (151) to 10.6 (66). Keeping in mind that the Northern FL side was made up across a number of Divisions within their league.

Karingal’s Brad Occipinti and YCW’s Josh Butland booted three each for the Sharks while Mornington’s Ryan O’Dell and Edithvale’s Jordan Davey, along with YCW’s Luke Paynter and Pines’ Brad Kiely, were among the best players for the Sharks.