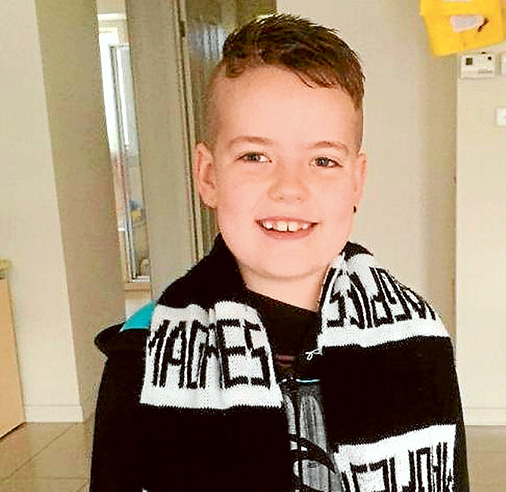 Cody, 10, has been chosen as junior mascot for Collingwood when they play the Western Bulldogs in the 2016 Robert Rose Cup on Sunday (29 May).

He will lead the team through the banner before the match on Sunday 29 May.

Naming rights sponsor, law firm Slater and Gordon, selected Cody who has developmental delays caused by a brain tumour detected when he was 22 months old.

Parents Tracy and Scott Wallace are thrilled he has been given the opportunity.

“Cody and his siblings are all Pies supporters, as are the extended family,” they said.

“To be able to see the joy on Cody’s face will be priceless – a little boy who has endured more than any child his age should have to. He has had countless brain surgeries.

“This will be a moment we cherish and the memory will last a lifetime.”

“The Robert Rose Cup promotes the inclusion of people of all abilities, to ensure that each and every one of us has the opportunity to participate in sporting activities and other opportunities,” Mr Mann said.

“Where we can, we try to support our clients beyond their legal claims.

“I am thrilled that we can arrange something special for Cody and I think everyone at the MCG will see what a delightful and inspirational little boy he is.”

The Robert Rose Cup is named after former Collingwood champion Robert Rose, who became a quadriplegic following a car accident in 1974.

Nepean School is in Seaford.

First published in the Chelsea Mordialloc Mentone News – 25 May 2016