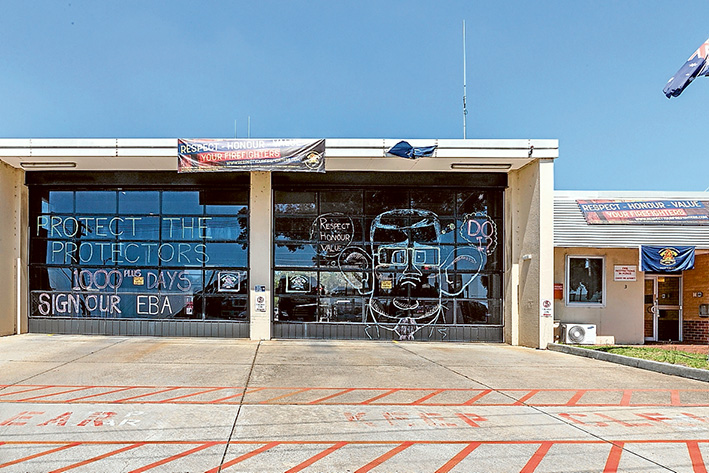 COUNTRY Fire Authority volunteers across Frankston and the Mornington Peninsula are “completely gutted” by what they see as a sell-out by the state government in enterprise bargaining negotiations between the United Firefighters’ Union and the CFA.

Fair Work Australia has backed a log of claims governing future UFU wages and work conditions “which could effectively give them control over the CFA”, the volunteer body says.

Volunteers are concerned the union seems to have the backing of Premier Daniel Andrews – although nothing is signed off as yet – but are buoyed by the support of Emergency Services Minister Jane Garrett.

The ramifications for firefighting on the peninsula are huge – with local volunteers threatening to leave en masse if their roles, positions and organisational standings are undermined by the professional body.

Somerville CFA captain Allan Monti, a volunteer of 28 years, described the UFU push as “a big threat to the community” and said his volunteers would find the proposed new requirements hard to accept.

“They will decimate our numbers because many volunteers will quit – that’s inevitable as their purpose diminishes,” he said.

“It would be a shame to lose their skills and experience which we are very proud of.”

Mr Monti said CFA volunteers’ affinity with their communities enhanced their ability to fight “often complex” fires in bushland near homes, but that their abilities would be reduced if the new rules meant paid firefighters held sway over them.

“That’s what we are all about,” he said. “The paid firefighters are not necessarily locals and they are not here all the time.

“If we go, and that’s a real threat, it will be a big loss to the community.”

The CFA says the cost of implementing the union’s new labour and infrastructure demands – “if the government caves in” – could be up to $1 billion, whereas they now work for free.

It is concerned that Mr Andrews will pressure Ms Garrett to accept the union’s log of claims after three years of negotiations. Under current legislation, it is reported that only Ms Garrett has the power to force the CFA to accept a new EBA.

About 20 Somerville and Tyabb CFA volunteers met last Wednesday afternoon (1 June) in a show of solidarity against what they see as a “sell-out” by the government. Other brigades across the peninsula are said to back their stand.

In any other circumstances, it would be difficult to believe that the government would accept the union’s EBA demands, Mr Collier said.

He said the UFU management was “seeking to drive a wedge between the unionists and the volunteers’ ability to work together”.

“This will undermine the CFA’s whole service delivery model which is based on our ability to work cohesively with professional fire fighters,” he said.

“That’s the basis for our whole existence.”

Mr Collier cited the Somerville stadium fire in early May to demonstrate what could have happened if the EBA had been in force. “At that fire the incident controller was a CFA officer with volunteers and paid firefighters under his command,” he said.

“That situation would not have been possible under the new rules.”

Many volunteers have said their desire to remain in the service would dissipate if they were “reduced to being mere hose draggers”.

Other concerns are the UFU bid for paid firefighters not to fight blazes until there are seven professionals on scene; banning paid firefighters from taking orders from volunteers except during major bushfires, and handing the union an effective veto power over CFA management decisions with the creation of a dispute resolution officer.

The most affected brigades on the peninsula are Mornington, Frankston and Rosebud, where there is a mix of paid staff and volunteers.

Volunteer Fire Brigades Victoria president Captain Nev Jones said the volunteers were not trying to interfere in legitimate wage negotiations, but that proposed clauses would give the union the power of veto over CFA operational and resourcing decisions, “effectively putting the CFA under union control”.

“There is the very real danger that the union representing two per cent of the CFA workforce will have control, and the 97 per cent of CFA who are volunteers will have no say at all,” he said.

“This dispute has reached a point where I must demand that the voice of the 60,000 volunteers from the 1200 CFA brigades from every community across the state of Victoria needs to be heard.

“I respect the role of all firefighters, both paid and volunteer, in delivering CFA’s service to Victoria. This is not about the pay and conditions of paid firefighters at the 34 CFA stations where they work with volunteers, this is about union control of the CFA.

“We cannot allow any decision that will reduce the ability of CFA to function into the future in the most fire prone part of the world.”

Frankston MP Paul Edbrooke – who is both a CFA volunteer and a former paid up UFU firefighter – declined to comment on the row other than to say: “I’m hopeful they come to a resolution soon.”