Pythons move on up to second 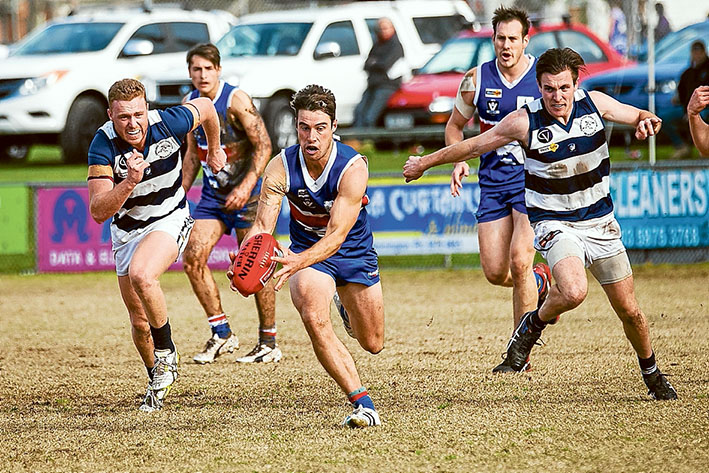 PINES moved to outright second on the Peninsula Division ladder with a strong performance against Mt Eliza at Wooralla Drive on Saturday.

It was a great performance from the Pythons, who tweaked some things during the major break that ultimately turned the game around.

James Freeman got hold of Pines in the opening half but coach Patty Swayne shifted ruckman Beau Hendry on to him in the second half.

Hendry was able to nullify Freeman while Tom Bongetti went into the ruck and started to dominate in that area of the ground.

Swayne said it was a “very good” win.

“We lost Luke Houldcroft early in the match with a shoulder and were down a rotation,” Swayne said.

“We also lost Shane Waterstone for half the match too. He got a wayward boot in the face which punctured two holes above his top lip and below his bottom lip. He went off and got stitched up and then he went straight back onto the ground when he arrived back in the third quarter. He was sensational holding onto the likes of Rohan Heasley and Ben Landry.

“Even when they were up by four goals, I felt we were still in the game.

“We had to make a contest of it. They were hurting us on the outside and we need to get the ball in tight. From here, the likes of Paul Scanlon, Chris Guganovic and Potts went to work.

“We just had to wear them down and I think the second half scoreboard shows that we did exactly that.

“Potts was sensational. He didn’t have a brilliant pre-season and he carried an injury in the first month or so of the season. He’s up and going now and is in really good form,” Swayne said.

The Dogs booted nine goals to one in the first quarter and led by 10 goals at half time.

Langwarrin booted four unanswered goals in the last quarter to run over the top of Karingal by just three points.

Nick Tuddenham played arguably his best game for the Kangas with three goals in a best on ground performance. Gerard Brown back into the team after injury was also a welcome addition. Sean Herdman and Kieran Albanese are critical forwards for the Kangas and neither played on the weekend, making the win even more impressive.

Michael Burke and Tommy Wilkinson were the best of the Bulls, while teenager Brad Occipinti booted four majors.

Anthony Bruhn booted five while Tom Capp was outstanding in his sixth game.

Brad Doyle and Dean Kemble were the best of the Tigers.