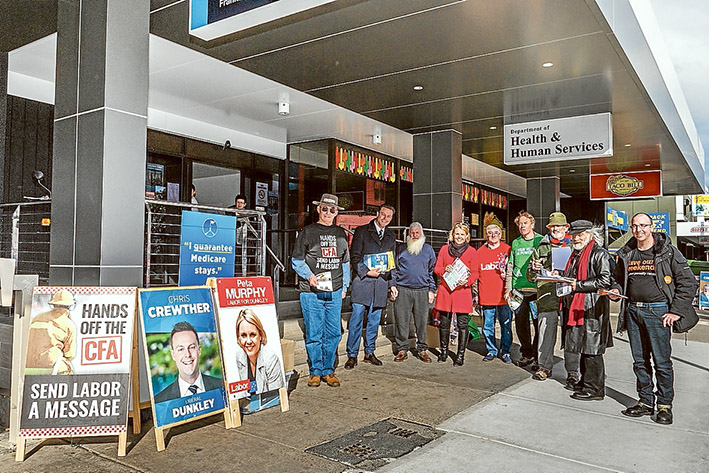 THE father-in-law of outgoing Dunkley Liberal MP Bruce Billson has had complaints to the Australian Electoral Commission about alleged “misleading” union and Labor Party flyers handed out at polling booths dismissed by the independent electoral regulator.

Arthur Ranken, the father of Mr Billson’s wife Kate, wrote to the AEC on 22 June demanding “election material” including posters and flyers urging voters to “put the Liberals last” and “vote to save Medicare” be immediately removed from Dunkley polling booths ahead of the 2 July federal election.

Mr Ranken did not disclose his Liberal Party membership or former official party office bearing roles when complaining to the AEC about unions engaging in “misleading conduct”.

When asked by The Times Mr Ranken confirmed he is a long-time Liberal Party member who has held “several” official party roles during the past few decades.

“I certainly said [to the AEC] I’m a voter in Dunkley, but where I’m coming from [on this] is on my own. I’ve got my own views,” he said.

Mr Ranken penned a similar complaint about “false and frightening information” at polling booths in six marginal seats during the 2014 state election in a submission to the Victorian Electoral Commission’s post-election inquiry into electoral matters last year.

In that submission, in July last year, Mr Ranken described himself as “a layperson” who “would be happy to discuss any aspects of my layman’s experiences at elections in greater detail if this would be of assistance”.

In his most recent letter to the AEC late last month Mr Ranken said slogans such as ‘Vote to Save Medicare’ “create worry, uncertainty and fear”.

“Prime Minister Malcolm Turnbull has been extremely clear in stating many times that Medicare under his leadership of the party will not be dismantled or changed,” Mr Ranken wrote.

AEC chief legal officer Paul Pirani responded to Mr Ranken by email on 23 June to state “the AEC does not agree with your view that the material attached to your letter discloses any breach of the requirements of the Commonwealth Electoral Act 1918 (Electoral Act)”.

Mr Pirani advised Mr Ranken, citing previous court rulings, that the AEC cannot “regulate the content of electoral advertising but rather only ensure that electors are clearly informed of the source of that advertising” and ensure voters are not being misled to register an invalid vote that will not be counted.

The AEC legal expert said in his email: “In the present instance, the electoral advertisements and HTV [how to vote] cards you have referred merely go towards the formation of the political judgment about how an elector will cast their vote rather than leading an elector to cast an informal vote.

“The AEC does not accept your characterisation of the ‘put the Liberals last’ message. Casting a vote which results in a candidate being put last (e.g. the last preference) does not result in an informal vote.”

Mr Ranken told The Times he maintains material distributed by unions such as Victorian Trades Hall and the ACTU at polling booths is misleading.

“The whole thing is a shocking mischief and as far as I’m concerned a disgusting lie to create major upset and confusion among the people,” he said.

Mr Ranken says the union movement made it clear online that it would replicate “their success” at this year’s federal election after its 2014 Victorian election campaign.

“We had clear warning that this style of trouble was going to happen.

“I see this as an attack on our democracy because it’s confusing people’s minds.

“People are being lied to and the electoral commission should be running the election properly, but they’re not doing it.”

Dunkley is a marginal seat with Labor hopeful Peta Murphy looking to win the seat for her party against Liberal candidate for Dunkley Chris Crewther.

Mr Billson is retiring from politics after more than 20 years representing the Liberal Party and held the seat with a 5.6 per cent margin at the 2013 federal election.