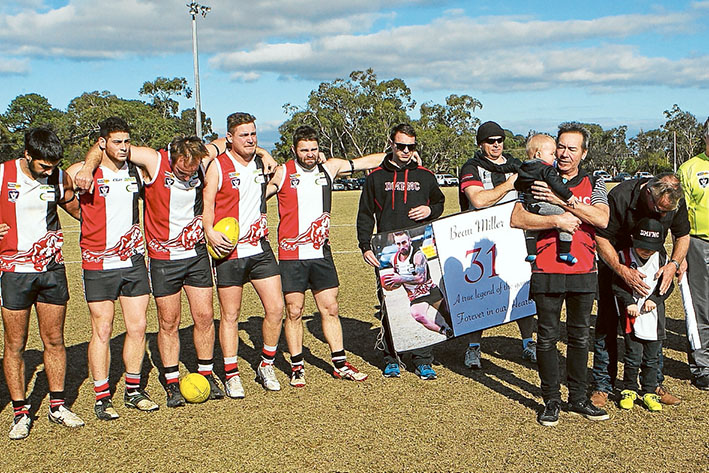 THE Devon Meadows Football Club was a super proud club on Saturday night.

It was more about how the Meadows went about the entire day after star player, two-time league medal winner and favourite son Beau Miller lost his fight with cancer.

After being diagnosed with a very aggressive cancer a couple of months ago, Beau lost his fight last Thursday, leaving behind wife Stephanie, two young sons and a football community that adored him both on and off the field.

The players from both sides kicked off the day with a guard of honour and the ground stood as one for a minute’s silence before Beau’s four-year-old released balloons into the sky.

In an emotionally charged match for both sides, the Meadows got away to the perfect start when Ash Adams kicked a goal, before Rye took control of the match.

At quarter time the Demons led by 16 points and they maintained that break until half time.

Devon Meadows coach Glenn Michie said after the game “that it was like we had a 23rd magnet on the board in the second half”.

“Things started to happen, the ball started to bounce our way and the group grew an extra set of legs,” Michie said.

The result was a six goal to one point third term that saw the Meadows go into the final break with an 11 point lead.

The home side, playing with the spirit of Beau Miller urging them along, extended their lead in the final quarter to finally run out 17 point winners.

It was a fitting result for a footy club that has had it pretty tough in 2016.

In the lead up to the match, Michie said the support of his football club from the local football community had been overwhelming.

“The support from all the clubs across both divisions and even the South East League has been amazing,” Michie said.

“My phone has been filled with messages of good wishes, which just goes to show how good the footy community is.

“We faltered against Frankston Bombers when Beau’s original diagnosis was announced but this time I’m really confident the group will have stronger resolve.

“Whatever the result, I’ll be proud that we can even get out there together and honour the great man (Beau),” Michie said.

Honour Beau Miller the Devon Meadows Football Club did, both on and off the field.

Former coach Brent Clinnick was one of many supporters at the game, who said afterwards that he couldn’t be a “prouder Devon Meadows football person right now”.

Fittingly, great mate Jesse Dehey was the best player on the ground and carried Beau’s son off the field at the end of the match.

Rye Football Club should be congratulated too. It was tough day for the Demons. They desperately needed to win to keep their finals hopes alive, while being respectful of the occasion.

There were many, many tears shed at Glover Reserve on Saturday, many of which were also coming from the red and the blue, both on and off the field.

The loss saw Rye drop to seventh place on the ladder, two points outside of the top bracket with one less game to play than four of the other six sides vying for a place in the five.

Sorrento also has one less game to play and its win against Dromana on Saturday was significant.

Playing their final game of the season on home turf, the Sharks simply had no choice to win this one if it wanted to play finals. Regardless of the fact they won, they are still outside the top five.

The heat was on some individuals and not surprisingly, they lifted when required.

Luke Tapscott was simply superb and answered his critics with a best on ground performance while Nick Corp was just as damaging with five goals. Nick Marsten needed to produce after a shocker the week before (he had plenty of mates) and he responded and Heath Cameron proved his worth in his first senior game in years.

The plucky Tigers just couldn’t hang on when the heat got turned up in the last, despite the efforts of Christian Ongarello across half back, Beau Cosson in attack with four goals and Billy Quigley, who has had a superb year.

Hastings kicked the opening goal of the game before Rosebud took control from that point on.

The margin was three goals at quarter time, five goals at half time and 47 points at the last change. Rosebud’s inaccuracy (14.19) saved the Blues from further embarrassment.

Greg Bentley was sensational with four goals in a best on ground display while Nick Boswell was devastating across half back.

The Blues have dropped to fourth place.

The game was set up in the first half when the Eagles got themselves 43 points in front.

Ben Crowe was electric once again with six goals, giving him 11 in the past two weeks, while Justin and Todd Farrelly and Ben Sedgewick were outstanding.

Troy Jacobson and Dylan Hoare kicked a couple of goals each for the Dales and were their best players.

Tyabb went scoreless for three quarters against Frankston Bombers on Saturday before finishing the game 1.3 (9) to 24.17 (161).

James Degenhardt was the best player on the ground with six goals for the Bombers while the midfield of Sam Fox, Brett and Dale Sutton and Ryan Kitchen was unstoppable.

Rohan McGrath and Riley West were the best of the Yabbies.

The Hillmen had 38 scoring shots to 12, including 13 to two in the opening term.

Jake Mitchell and Luke Marchetti were outstanding for the Hillmen while Nick Rutherford and Kain Stratton tried hard for the Magpies.