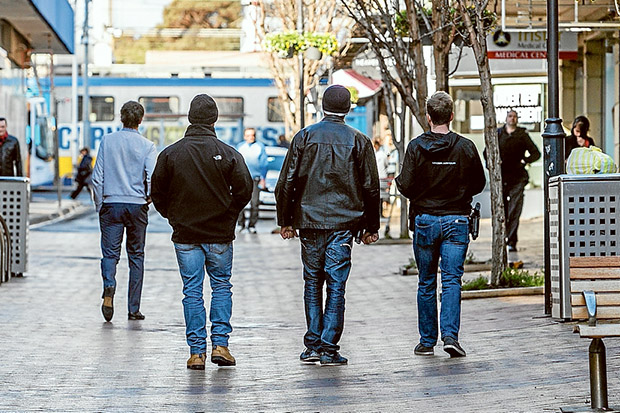 FRANKSTON police say “volume crime” offences are expected to trend lower following the recent arrests of several recidivist offenders – although the latest figures may still be above average.

Thefts of cars, from cars, and aggravated burglaries are being affected thanks to the locking up of more than 60 offenders over the past six weeks.

Backing up the commissioner’s claim is Victoria Legal Aid executive director of criminal law Helen Fatouros, who said 40 per cent of offences were committed by about 5 per cent of offenders.

“This suggests a hard-core group of repeat offenders are responsible for a staggering number of crimes in Victoria,” she told a recent Human Rights Law Conference.

Many local offenders are very young – as shown by the arrest of six boys aged 11-16 from the Frankston, Seaford, Skye and Langwarrin areas on aggravated burglary and car theft charges (‘Bailed teens’ crime spree’, The Times 1/8/2016). Tellingly, many of the offences were committed while the boys were out on bail for similar offences.

This leniency by children’s courts adds to police frustration as it undoes all their good work in catching young offenders. They claim – despite the falling number of offenders – that “juveniles are driving crime” in the Frankston and surrounding police districts, and that the courts seem to have become a “revolving door for young offenders”.

Their concern is that, despite their success in getting young perpetrators off the streets, it is soon “business as usual” for them when they walk out of court scot-free.

A case in point relates to a Frankston boy, now 16, who over several years appeared before children’s courts more than 60 times on robbery and crimes of violence charges, but was never convicted. He pushed his luck once too often, though, last year, when he was arrested and charged after allegedly robbing a Seaford liquor outlet and assaulting the female manager with a bottle. He is now in jail – but on other matters.

The Department of Human Services would not comment on claims that it had spent $1 million a year to house and feed the youth, find him a home and generally try to keep him “on the straight and narrow” before he went to jail.

“There is frustration, but also real fear for both members of the community and for the juvenile offenders who are in danger of being harmed if they are caught robbing a house,” a senior policeman said. Children’s court appearances by boys as young as 13 are increasingly common, on multiple car theft and aggravated burglary charges, with a quick release the most likely result. And this is despite some facing up to 33 counts, according to court records, and having a history of offending over their short “careers”.

Police all over the south-eastern suburbs engaged in the crime fight are, naturally, concerned that these young offenders walk free too easily.

The mothers of some offenders are said to be torn between their natural inclinations to harbour their sons and a growing realisation that they must be brought to justice.

“We keep arresting them and taking them before the courts but it is up to the judiciary to take the next step,” the policeman said.

“If they were adults they would be going straight to jail.”

The policeman said one boy, who does not go to school, would typically “go joyriding all day and give the finger to security cameras at servos” because, by their previous leniency, the courts have shown him there are no consequences for his poor behaviour.

Like many youngsters of his ilk, he has revelled in the protection afforded by layers of opportunity for rehabilitation without his freedom being jeopardised.

But the “sensationalised media narrative on complex social issues – such as youth offending – invariably leads to short-term problem solving, and is counterproductive”, according to Legal Aid’s Helen Fatouros.

“Characterising young offenders as thugs who are inherently bad risks the adoption of a simplistic get-tough approach,” she said.

“It can lead to life-long stigmatisation, increased re-offending and the further risk of minority suburban youth becoming entrenched in crime well into adulthood.

“Rather than responding with unnecessary, punitive and reactive changes to the law, we should be aiming for long-term outcomes, such as reduced re-offending and strong inclusive communities that enable equal opportunity for prosperity.”

“Over the past five years, there has been a 42 per cent decrease in the number of youth offenders aged 10-17 years,” she said.

“However, there are pockets of increasingly serious offending, and a small number of youths are responsible for large proportion of the overall offending.

“We need to focus our interventions more intensively on these more serious repeat young offenders, but we must do it in a way that maximises their chances for rehabilitation by breaking their connection to crime and negative peer groups.”