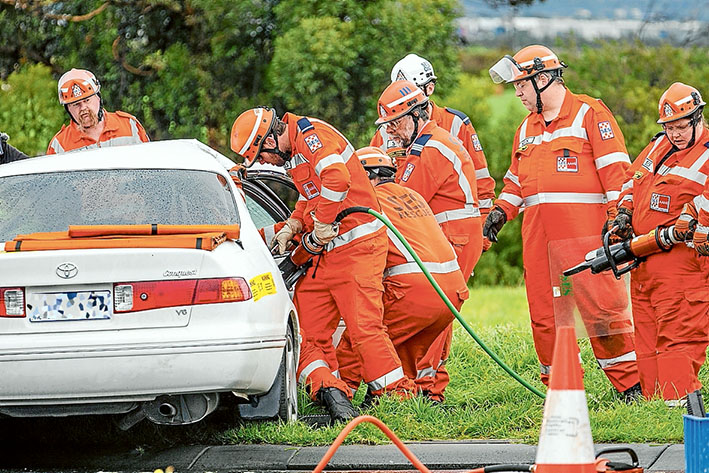 Car Accident Patterson Lakes Monday 1st August. A truck had parked on the path leading up to the Thompson Rd bridge and the workers were standing at the front of the truck ready to work on the armco that leads up the bridge, when a car lost control spinning over 360 degrees and slamming sideways into the rear of a the truck. Police, Highway Patrol, Patterson River CFA, Ambulance and Frankston SES attended the scene. The SES took quite a while to extract the driver from the Toyota and she was taken to hospital in an ambulance. I was told the tyres were bald and that Child seats were taken from the car but no children were in the car at the time of the accident. The roads were wet at when the crash occured.
Share
Facebook Twitter LinkedIn Pinterest Email

A WOMAN lost control as her car spun more than 360 degrees and slammed sideways into a truck at Patterson Lakes, Monday 1 August.

The truck was parked on the path leading up to the Thompson Rd bridge and workers were standing at the front ready to work on the steel barriers when the accident occurred, 10am.

The truck’s tray made a “significant intrusion” into the body of the car, putting the woman, in her early 30s, in danger, SES incident controller Philip Holt said.

SES crews moved the truck forward and used the jaws-of-life to cut her free. She was taken to hospital by ambulance.