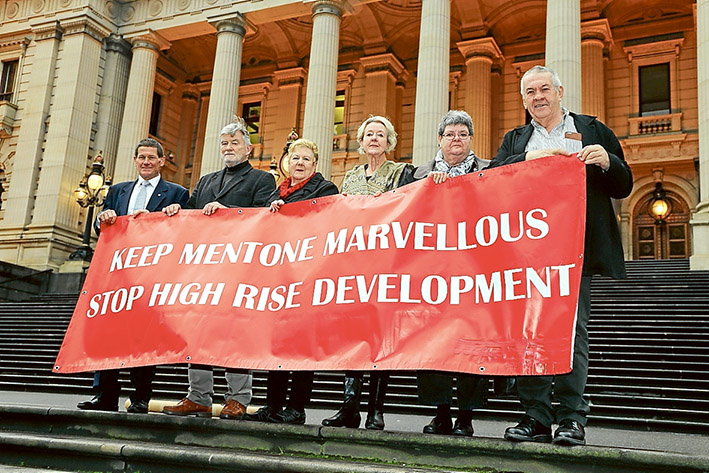 In 2015 Mr Wynne controversially overruled Kingston Council’s decision to make a four-storey height limit in central Mentone ‘mandatory’ until the year 2030, instead ruling it be ‘discretionary’ (‘Height limit change shock’, The News 23/12/15).

No explanation for leaving the door open to high-rise buildings in Mentone has ever been given by the Minister despite repeated requests for an explanation by The News and residents.

Sandringham Liberal MP Murray Thompson took up the residents’ plea for answers from the Planning Minister by playing a recording of the Les Miserables song Do You Hear The People Sing? in the Parliament chamber.

The Speaker censured Mr Thompson for his actions.

“The Victorian Labor government ripped up the mandatory four-storey height limit for the Mentone activity centre and effectively said to developers, ‘The sky is the limit’. Thirteen storeys in Bentleigh — how many in Mentone?,” Mr Thompson asked in Parliament.

“The decision was made without consultation with the Mentone community and is contrary to the decision of the Planning and Environment Act 1987 panel report of September 2013.”

Mr Thompson called on Mr Wynne to reverse his decision “to maintain the amenity and the future liveability of marvellous Mentone”.

Mrs Booth said Mr Wynne had plenty of chances over several months to acknowledge concerns about the possibility of high-rise development in Mentone before the protesters arrived at Parliament.

“It caused quite a stir … Richard Wynne will not see me. I have been trying to see him since the week before Christmas last year,” she said.

“I’ve been sending emails and writing letters and have heard nothing back.

“We just want him to come and look at Mentone and then make up his mind. We don’t want anything higher than Kilbreda tower.”

The News has asked for reasons for Mr Wynne’s intervention to amend council’s Mentone Activity Centre Structure Plan without response on three occasions over several months.