Stonecats hang on in epic 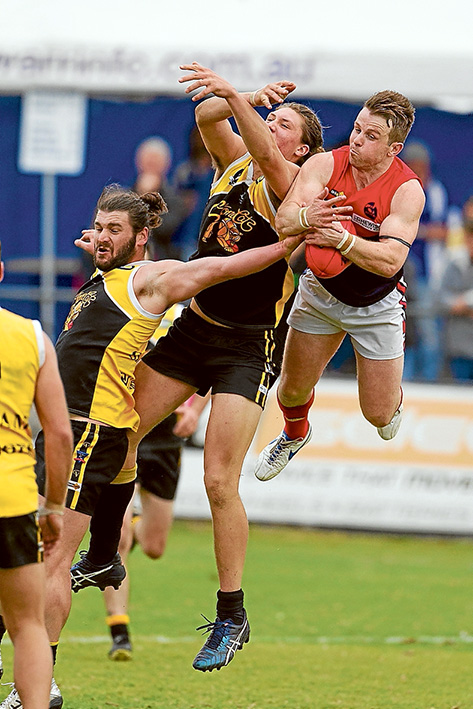 IF it bleeds, you can kill it!

That was a famous line used by arguably the greatest ever AFL footballer Leigh Matthews in 2001 when he was referring to his great Brisbane Lions side beating Essendon.

For movie buffs, they’ll know he grabbed the line from Arnold Schwarzenegger in the movie Predator.

Suffice to say that it can be used again in reference to the great Frankston YCW, a team that was wounded on Saturday in the second semi-final against Mt Eliza but as great sides do, still managed to win a thriller 18.7 (115) to 17.8 (110).

What it proved to Peninsula football supporters is that the 2016 premiership is not a one horse race.

That wasn’t the case at the halfway mark of the season when Mt Eliza was belted by the Stonecats at Wooralla Drive by almost 100 points.

Mt Eliza were down and on the canvas early in the match when they trailed by as much as six goals. Every time they came at YCW the champs responded.

Even in the last quarter when somehow Mt Eliza got their noses in front, YCW were able to steady the ship and get back out to a 20 point lead.

However, what we saw late in the game was something we haven’t see from a side against YCW in the past.

What people admire about the Stonecats is their ability to absorb pressure for long periods, physically and mentally wear down a side and perform for better longer – they have been doing it for more than a decade.

Opposition in the past have failed to be able to go the distance.

That changed on Saturday. Mt Eliza came storming home late to get within five points in an entertaining, high quality, intense game of football.

At one end of the ground, YCW’s Anthony Bruhn was dominating with seven goals. At the other end, Justin Van Unen returned from a serious hamstring injury to boot seven goals.

The midfield battles of Rohan Heasley and Lachy Wallace were a feature, both outstanding for their respective teams.

The hard and tough Luke Collins and Dave Barton went toe to toe and were significant for their teams. Paul Minchington proved again how good a player he is, especially on the big stage and Scott McLeod and Kevin Lylak were at their best for the winners.

Matt Lille had a tough job in the ruck for the Redlegs but rose to the occasion, Sam Gill led from the front and Jimmy Clayton almost received the ultimate celebration in his club record breaking 222nd game.

The game had everything – freakish acts, selfless acts and 35 goals in a second semi – it was a crowd pleaser.

The Stonecats got what they wanted though – a pathway straight to the grand final.

Mt Eliza will need to front up again this Sunday in the Preliminary Final with a lot more work to do.

Mt Eliza will play Pines in the Preliminary Final this Sunday after it smashed Bonbeach for the third time this season.

The Sharks were blown away early and never got close to the Pythons.

The top three are the last three standing in the Peninsula finals race.