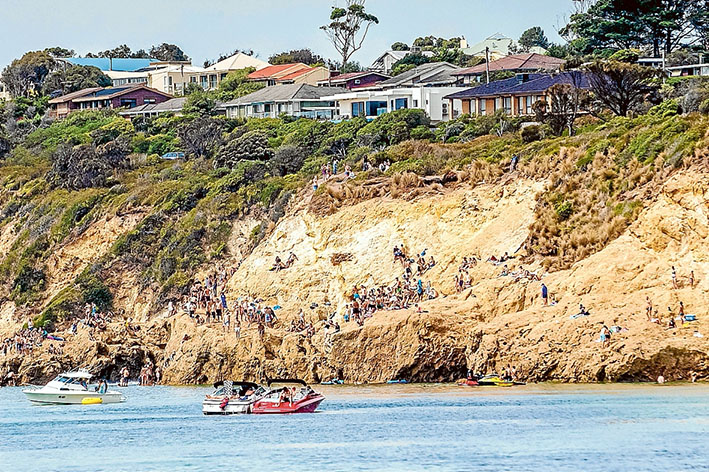 AN alcohol ban being brought in to control “inappropriate behaviours” at the Pillars cliff swimming area at Mt Martha will extend several blocks inland, effectively making it illegal for anyone to have a drink outside of their own property.

The ban is the first major move to ease problems at The Pillars since last summer police and Mornington Peninsula Shire rangers booked hundreds of vehicles illegally parked along the Esplanade.

Mornington MP David Morris says the state government has “failed to capitalise” on “a temporary reprieve” over winter to come up with a solution.

While admitting that he does not know how to fix the problem, Mr Morris says Environment Minister Lily D’Ambrosio has “a department of advisers” to ask.

“The issues at The Pillars require a multi-jurisdictional approach, and only the state government, through the Minister for Environment, have the authority to solve the problem,” Mr Morris has told Parliament.

The Pillars over the past couple of summers has become a major attraction at Mt Martha, with its own space on social media.

Residents have complained to the council about unruly behaviour and cars being parked outside their properties.

A plan for off-street parking was also drawn up and submitted by residents.

So far the only reaction by authorities appears to be more no parking signs and vegetation being cut back along the side of the Esplanade.

The shire’s alcohol ban, which can enforced by its own rangers or police, will be on trial for six months from November.

The ban states “that a person must not consume or have in their possession liquor other than in a sealed container” and covers all public land along the Esplanade from Sunshine Drive to Lempriere Av and inland including Edward Grove, Two Bays Court, and parts of Alexandrina Rd, Marguerita Av, Deakin Drive and Bridgeford Av.

Shire rangers head Paul Bonnici told councillors at a meeting on 12 September that “the intent of the local law is to protect against behaviour which causes detriment to the amenity and environment of the municipal district as well as to protect the community interest”.

The area around The Pillars would be the 51st location where the ban applies in the shire.

Mr Bonnici said the popularity of The Pillars had “unfortunately … led to a number of associated challenges including car parking matters and inappropriate behaviours from alcohol consumption by visitors, significantly impacting on the community and the environment.

“Specifically, the alcohol use with visitors going to The Pillars has resulted in littering impacting the environment and at times visitors displaying offensive and public nuisance behaviours.”

He said the alcohol ban included surrounding streets “as it has been identified that visitors to the location will often park some distance away and walk to the foreshore site”.

Mr Morris told The News that the liquor ban was “all good” in that it increased police powers but it was “treating the symptoms not the cause”.

In Parliament he said that “almost overnight” The Pillars had become a “must visit destination for young Victorians from across the metropolitan area”.

“While usually just out for a harmless and pleasant day by the bay, the sheer volume of numbers has caused constant traffic problems,” he said.

“While I’m not adverse to anyone having some fun, there are risks both on the road through the number of cars parking in no-standing zones and through inexperienced swimmers jumping from the cliff into the bay.

“Swimmers were injured last summer, and volunteers from both the Mt Martha Life Saving Club and Mt Martha CFA have had to divert significant time and energy to managing the risk.

“The government has been aware of the difficulties in this location since January, yet the problem remains unresolved. The council simply does not have the power to deal with the situation.

“The government needs to come good on its promise to solve this problem before summer again brings out the crowds.”