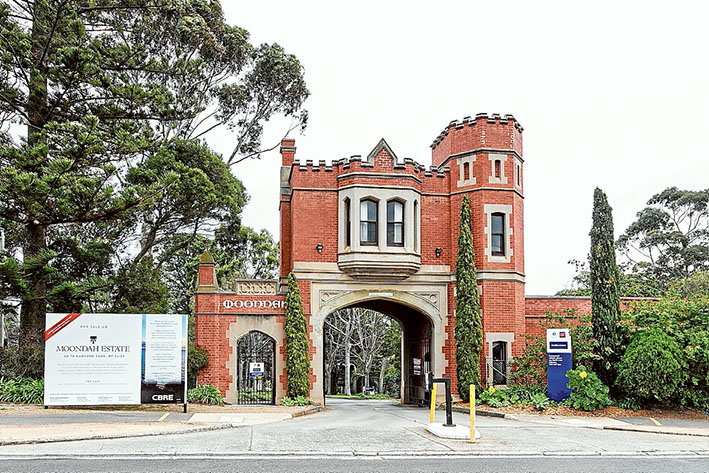 For sale: A $20 million price tag has been placed on the historic Moondah property in Mt Eliza owned by the Melbourne Business School. Below, a booklet from the days when it was run as the Hotel Manyung.
Share
Facebook Twitter LinkedIn Pinterest Email

And they are looking for help from peninsula residents to give the village a name that is in keeping with the history of the iconic site.

The 8.9 ha property on Kunyung Rd, Mt Eliza was placed on the market in June in an international expressions-of-interest campaign and was expected to fetch in excess of $20 million.

At the time CBRE sales assistant Bianca Butterworth said that price [$20 million] was “rather conservative given [the property’s] unique nature”.

Ryman Healthcare has 30 retirement villages, mainly in New Zealand, but had been searching for suitable sites in Victoria when the property became available. Communications manager David King said the Moondah site will be a “resort-style” retirement village with indoor pools, hair and beauty salons, cafes, and movie theatres as well as care hospitals.

“We name our villages after prominent people with connections to the area, for example, Weary Dunlop, Edmund Hillary, Kiri Te Kanawa, Bruce McLaren,” he said.

“So we will be looking for suggestions for a name from Mt Eliza locals”.

The Mt Eliza property belonged to the Melbourne Business School, which ran business courses from the site for 59 years. Before that, it was part of the former Moondah estate built by James Grice in 1988 and owned in the late 1940s and early 1950s by the late Sir Reginald Ansett.

The Times reported in July that the school was selling the 8.9 hectare Kunyung Rd property, partly due to falling interest in regionally-based business courses and a plan expand the school’s Carlton site as a “world-class centre for business education”.

Ryman managing director Simon Challies said he was “excited” by the purchase.

“This is an outstanding site in terms of its natural beauty and it is going to make an absolutely stunning place to live for retirees who love the peninsula,” he said .

Mr Challies said the company’s research showed there was a shortage of retirement living options at Mt Eliza and on the wider Mornington Peninsula.

The new village would include independent living apartments and aged care, and employ more than 100 staff.