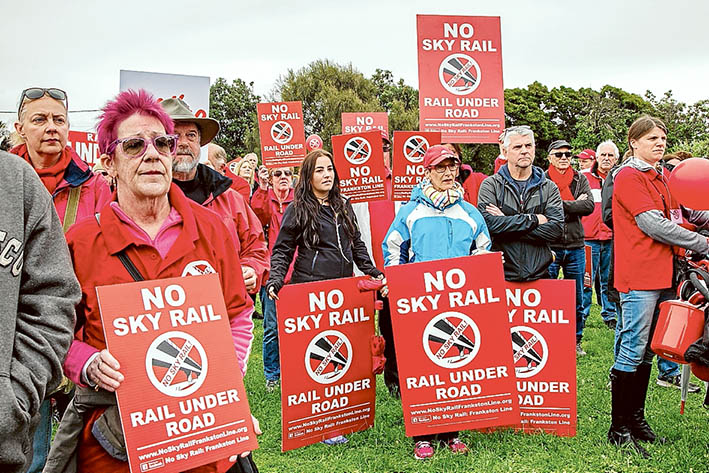 MORE than 300 protesters against any form of elevated rail along any part of the Frankston line marched to show their dismay at level crossing removal plans released this month.

No Sky Rail: Frankston Line marchers walked from Chelsea to Edithvale on Sunday (18 September) to protest against rail over road being built at any Frankston line crossings. The LXRA has also released ‘rail trench’ and ‘rail bridge’ options for level crossings at Seaford, Bonbeach, Edithvale, Mentone and Cheltenham and is seeking community feedback on the plans before the end of October.

No Sky Rail: Frankston Line group president Willem Popp said the state government should listen to community opposition to any form of ‘sky rail’ in the form of rail built above road up to 16 metres high.

“We had 300 to 400 people coming out … and we expect many more people at future demonstrations.”

He said a person with a fake name had posted a message on Facebook wrongly claiming the protest march had been postponed for two hours on Sunday.

Mr Popp accused the government of wanting “a quick and easy” way to separate road from rail instead of investing more time in rail under road solutions to last for generations in bayside suburbs.

“We will continue to fight and put forward the views that rail under road is the preferred option. It is achievable and realistic.

“They shouldn’t take the dirty, nasty solution just to meet their short term aims of getting these crossings done within their short time frame.”

Group member Sean Wise, an engineering project manager, called on the LXRA to release all the technical information collected before rail under road was rejected as options at Frankston and Carrum.

He said “glossy brochures” released by the LXRA are no substitute for the engineering research commissioned by the Department of Transport body for the $1.6 billion project set to change suburbs for the next century.

“We want the level crossing removals to proceed but there’s a lot of misinformation going around,” Mr Wise said.

“We’re going to consultation sessions and no level of technical detail is being provided.

“If stabling yards are being removed at Carrum why can’t everything be moved roughly 350 metres south at Patterson River and go under as you would go over?”

LXRA documents say rail under road “has been set aside due to complexity with managing existing overland flow” at Skye Rd in Frankston.

“Lowering the railway line at Skye/Overton Rd will create a barrier across the existing floodplain and interrupt overland flows.

“Mitigation to the interruption of overland water flows has been investigated in conjunction with Melbourne Water, with no solution identified.”

The LXRA indicated 8-11 water pumps would be needed to ensure water flowed from one side of any railway trench to another and “this was deemed as not practical due to the ongoing maintenance liability and reduced floodplain resilience.”

Mr Wise wants the LXRA to be “completely transparent” and release the engineering findings to the public.

“It all smacks of rushing the project and putting two options out to appease people but they’re going to go rail over road anyway,” he said.

“If other urban developments haven’t affected the Edithvale-Seaford Wetlands to this stage an 800-metre long trench isn’t going to.

“Ormond, Bentleigh and McKinnon are fantastic examples of infrastructure – bring it on for the other crossings.

“If Bob the Builder in Chelsea can go and build an underground carpark eight, nine, ten metres in the ground then I reckon a major contractor can do it.”

Construction on eight level crossing removals along the Frankston line will begin in early 2018.

See your.levelcrossings.vic.gov.au for further details and ways to provide feedback to the LXRA.