Light and sound show at flick of an app 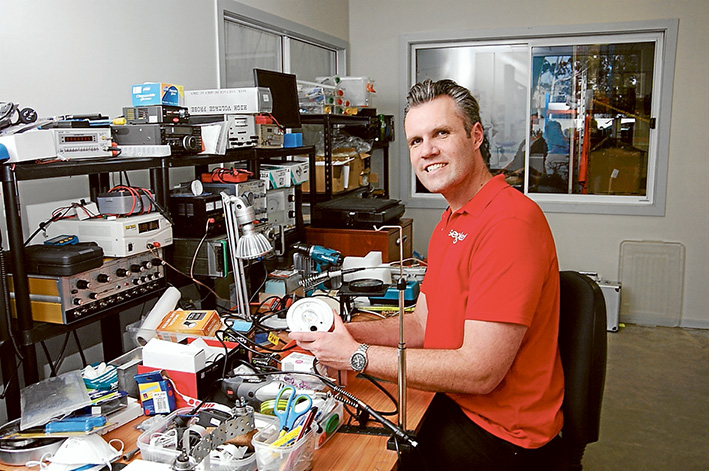 ACTION, camera, lights and sound. The sequence might sound out of order, but it all adds up to security when applied to a new light developed by a Braeside company.

The light has an inbuilt digital camera that transmits images straight to the Cloud and can be monitored by smart phone or computer.

Even if the light is turned off, an infrared camera will record images in the dark.

The Snap light also comes equipped with a speaker and microphone, which provides the opportunity to converse with someone knocking on the door, even if you aren’t at home.

David Clerk, CEO of General Innovation Australia, can quite rightly claim to have had a light bulb moment.

Actually, there have been several light bulb moments that he and his team – including electrical engineer father, Fred, a former chairman of the Institute of Engineers – have come up with to extend the company’s product line.

With LED lights becoming the norm (at one stage there were 5000 registered LED manufacturers in China) Clerk says his company needed “to think of something different in what was an eroding market”.

Until now his company has been heavily involved in supplying and installing LEDs to business, including apartment blocks and department stores.

Using the iPhone and its multiple purposes as an inspiration, Clerk set about having a close look at the light bulb to see what else it could do besides illuminate.

As a result, Snap is the flagship of a range of lights now being marketed by Machtig brand in partnership with Chinese manufacturer Sengled for commercial and private uses.

Clerk, who lives at of Mt Eliza with his wife Sascha Schubiger (the company’s operations manager) and two daughters, was a brand manager for the Holden Racing Team while studying at both Monash University and Swinburne TAFE.

A talented rower and former Haileybury student, he had earlier won a scholarship to the Australian Institute of Sport and rowed in twos, fours and eights.

His experience and attraction to motor racing has led to his company having an ambassador deal with Nissan-sponsored V8 supercar driver Rick Kelly.

“Nissan is all about innovation and is a progressive car company,” Clerk says when explaining the “good fit” of the two companies. “Their latest logo is Innovation that Excites and they’re all about delivering new technology into the car world.”

Clerk says security is the cornerstone of Snap. It comes equipped with a high definition camera that is sensitive to movement. In the blink of an eye movement will turn on the light and the camera, instantly storing images in the Cloud.

As previously mentioned, the camera will also record images even with the light off.

The light comes with an app that enables the camera to be monitored from any device.

The camera can be tuned so it is pixel-activated in three separate areas covered by its wide-angle lens, eliminating false alarms from branches or straying animals.

The remote access also means that users can at any time take a look at the entire area covered by the camera.

The app will send an alert to any mobile device if movement is detected and, if it’s a trades or delivery person, a two-way conversation can be had through the inbuilt microphone and speaker.

Priced at $299 Snap includes free cloud membership and the storing of images for 24 hours.

The images can be downloaded and used as a record or for evidence in the case of theft or break-in.

Clerk says extra time can be bought to keep images for weeks on end if a property owner is going away on holidays or leaving a building unattended for long periods.

The camera has face recognition and up to four can be running at the one time.

Also in General Innovation’s stable is a smart lamp (Pulse) that includes 13-watt JBL Bluetooth speakers which can play sounds from any device, including an analogue turntable and amplifier, although this requires an extra converter.

The dimmable LEDs can be fitted in any room in the house or workplace and their range, or distance from the router or gateway can be extended to 30 metres with Boost, which is an LED with a Wi-Fi repeater.

Clerk says the LEDs are rated to last 25,000 and are likely to outlast the speakers.