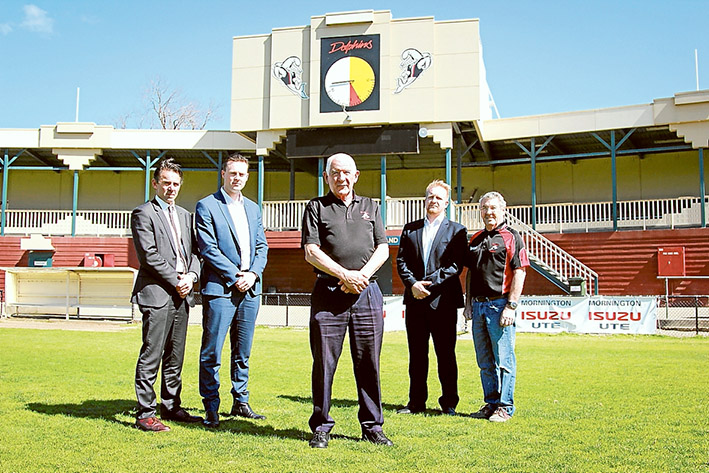 TIME is ticking away and no one is more aware of the dangers threatening the very existence of Frankston Football Club than stalwart Bryan Mace (centre), with the mayor, Cr James Dooley, Liberal Dunkley MP Chris Crewther, Labor Frankston MP for Frankston Paul Edbrooke, and former board member John Davis. They formed a team at the Dolphins ground on Wednesday. “Putting politics aside, we’ve joined together to urgently call on AFL Victoria to retain the VFL licence for Frankston Dolphins,” Mr Crewther said. “By working altogether, we will advocate for a positive solution to be found to keep the club going. This is important not only for the club, but for aspiring footballers across Frankston and the peninsula who aim to get to VFL or AFL level, the community and creditors, who include many local small businesses who would benefit far more by having the club continue.” Picture: Cameron McCullough
Share
Facebook Twitter LinkedIn Pinterest Email

THE door to Frankston Football Club’s long-term future may be ajar – but the club formed in 1887 will not be permitted to field a team next season.

AFL Victoria said on Friday it had formally terminated the Dolphins’ playing licence for 2017, and had already told the club’s administrators.

However, AFL Victoria CEO Steven Reaper said that if the club’s ongoing viability could be proved over the next few months he was hopeful that a “solution that is both sustainable and viable can be considered going forward for a VFL presence, potentially from 2018”.

This makes a meeting today (Monday 3 October) between creditors and the administrators –Paul Burness and Con Kokkinos, of Worrells Solvency and Forensic Accountants – so crucial.

Mr Burness said the Dolphins four-man board had proposed an offer – or deed of company arrangement – for creditors to consider.

He said its acceptance would allow the club to continue trading and that staff, coaches and players would be paid in full.

However, ordinary unsecured creditors would receive only a partial return on their debts over four years.

“The creditors will effectively have two real options: vote to accept the proposal put forward by the board, or they can vote to place the club into liquidation,” Mr Burness said.

But he said “liquidation is unlikely to yield sufficient recoveries to allow the payment of any portion of the ordinary unsecured creditors’ claims”.

Mr Burness said he believed the club could be saved. “I have put together a financial analysis that seeks more fundraising and key sponsorships and I believe the club has good prospects,” he said.

“The reality is that if the club loses its licence it will be hard to complete a successful restructure.”

The Dolphins owe $1.5 million – mostly to the state government and Tabcorp over pokies’ licences – which the AFL said Friday was “far in excess of our previous understanding”.

“They [know] that Frankston is an important region for them and they do want a VFL presence here,” he said.

He said the club had been told that its VFL licence had been breached and it can’t currently meet its conditions, but that it can “come back and show cause why [it] is not in breach”.

“If the creditors keep the club afloat past next Monday and the club can prove their long-term financial viability and put better governance structures in place, AFL Victoria is willing to reconsider re-granting the VFL licence,” he said.

They agreed it was crucial the AFL not make a decision on the club’s playing licence until after Monday’s meeting of creditors. “Culturally, the club is vitally important to the peninsula,” Cr Dooley said.

“They are the pinnacle of football here with the next equivalent club being Port Melbourne. If they were to go, it would create a huge hole in the community here.”

Mr Burness confirmed he had “received overwhelming indications of support from the coaching staff, players, employees, members, supporters and sponsors”.

“This included several offers of financial assistance should the club continue as a going concern,” he said.

“It was also noted that the Frankston City Council had indicated a willingness to provide the club with rent relief should it continue into the future.”

Former Dolphins captain Paul Kennedy said it was “understandable AFL Victoria might be concerned with the Dolphins’ performance on and off the field in recent years”.

“We are an easy target because we have only won 20 games in the past eight years,” he said.

“But the new function centre is generating good business and the administrator says the club has a financial future once it comes out of administration.

“If AFL Victoria helps the club appoint a quality general manager who can maximise returns from the function centre then there is no doubt the Frankston Football Club will be viable.”

Frankston MP Paul Edbrooke, who was behind a petition to save the club last week, said he was “shocked by the news of the termination”.

“Sport is the social fabric of our society and we need to show the AFL that the Frankston community won’t stand by and let this happen,” he said.

“I call on the AFL to reverse their decision and if you agree, I urge you to sign and share this petition.”

By Friday it had received almost 3000 signatures – a sign that, despite the axe hanging over the club’s head – its future is in everyone’s hearts.