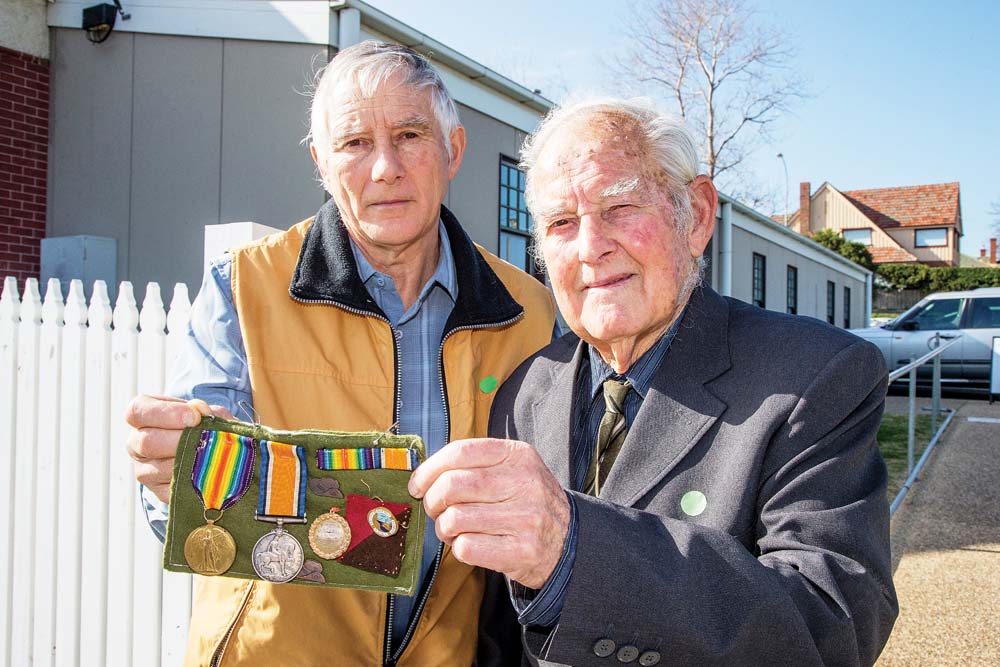 “A SURVIVOR” is how Alan Scoble describes his late-grandfather Handley Scoble, who enlisted for World War I at the Frankston Mechanics’ Institute in early 1917 and then joined the other troops for a rousing send-off from the hall steps.

Mr Scoble was at the hall last week for the War Heritage Roadshow, to which many Frankston families brought items of service and wartime memorabilia that shaped the story of Australia’s war effort and our local community’s contribution.

At the roadshow, conservators and historians explained the significance of the various medals and memorabilia and advised on their care, cleaning and preservation.

Mr Scoble, 63, and his father, Harry, 85, brought along Handley’s City of Frankston medal – nicknamed the “Bob” medal – as well as his British War medal and Victory medal to show the experts.

The mechanics’ hall has played a big part in the family’s past. It was from there that Handley’s brigade marched to the station amid rousing cheers from a patriotic crowd. The trained at the Broadmeadows and Royal Park Army camps and, later, after they were deemed battle ready, boarded the troop ship Ballarat at Station Pier for the voyage “into hell”.

On reaching the English Channel on 25 April 1917 – Anzac Day – the ship was torpedoed by a German submarine off Wolf Rock. Fortunately, she sank slowly, giving all 1752 diggers on board time to leave the ship and be ferried to England.

One was Hanley Scoble, then 24, who fought at the fiercely contested Flanders and Ypres districts of Belgium as a machine gunner and managed to survive and serve out the war.

Grandson Alan – who was 21 when his grandfather died in 1976 – recalls hearing stories of his wartime exploits, such as the captain of the stricken troop ship calling out: “Don’t rush boys, we have plenty of time” as they took to the life boats – and then managing to “retrieve” the skipper’s binoculars from the bridge before making his way aboard.

Later, while manning his machine gun in battle, he told of being all but buried alive by debris when a large enemy shell exploded nearby.

After the war, Handley Scoble returned to Frankston for a celebratory homecoming at the same mechanics’ hall. There, he was presented with the City of Frankston medal – nicknamed the “Bob’s” medal – to go with his British War medal and Victory medal.

“The Frankston medal – like those presented to returning troops by many municipalities – was intended as a mark of thanks by local residents,” Alan said.

“I thought the medals may be significant because I knew my grandfather enlisted at Frankston.

“His name is also at the Frankston cenotaph and at the RSL in Cranbourne Rd.”

Handley Scoble joined his brother, Arthur, on their pig farm near Frankston South and became so well established that Scoble St and Handley Ct are named after him. He died aged 83 in 1976.