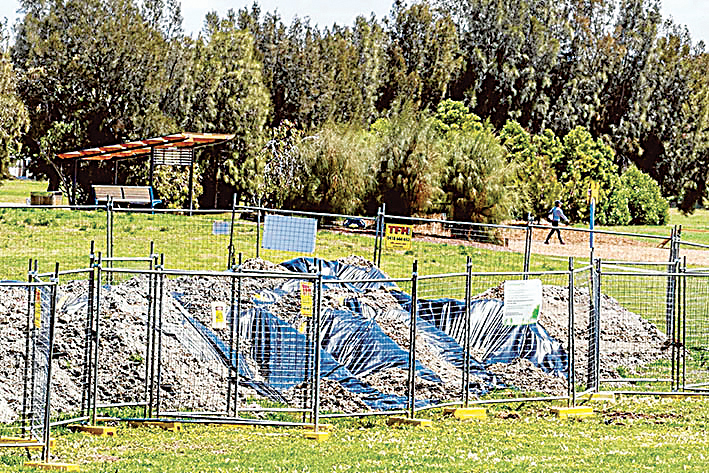 ALLEGATIONS that independent reports into the dumping of asbestos-riddled soil at Bicentennial Park in Chelsea late last year were “changed … under pressure” have been aired in state parliament.

Ms Peulich has called on Labor Special Minister of State Gavin Jennings to instruct the Local Government Investigations and Compliance Inspectorate to step in and investigate.

“I have come to receive some very detailed notes of actions surrounding the dumping of asbestos at Bicentennial Park and the recriminations that ensued, including an internal investigation which found that there was a complete failure of due diligence in the awarding of the contract, that records were altered after the issue found its way into the media and that the public and some staff were placed at risk of exposure to asbestos,” Ms Peulich said in comments made under parliamentary privilege.

A substantial pile of dirt was moved in October last year from a former carpark in Glenola Rd opposite Chelsea Primary School (“Asbestos scare at play park”, The News 30/11/16),  earmarked as the location of a new kindergarten, and dumped at a former landfill site at Bicentennial Park, near a children’s playground.

Kingston Council CEO John Nevins ordered an investigation earlier this year “to identify any procedures and to ensure further incidents are avoided”.

“Results indicated that isolated areas of the site contained small amounts of asbestos and heavy metals — lead and zinc — in the surface fill material,” Mr Nevins said in January.

“It is believed the source of the contaminants was most likely historical use of lead-based paint at the site, building material from a former house demolished at the site or from fill material brought to the site sometime in the past.

“Independent expert advice has stated that the risk is very minimal.”

The contaminated soil was removed from Bicentennial Park and transported to an Environmental Protection Authority approved tip on 16 December last year.

Council’s investigations into any breakdown in its processes has not been publicly released. Clean-up costs at both Glenola Rd and Bicentennial Park cost ratepayers $813,500.

Ms Peulich said in Parliament last week that she understood council employed a legal firm, “and I will not say which one”, to conduct several investigations including the dumping of asbestos at Bicentennial Park.

“The disturbing elements are that there was then pressure to change that particular report,” she said.

“The consequence of all of this was that a lowly team leader’s employment was terminated, and the claim was made that he was the sole reason for the asbestos being dumped at Bicentennial Park.

Ms Peulich said she will hand over any evidence to the Special Minister of State for investigation.

“I am more than happy to provide all of this documentation which was provided to me on a confidential basis for full investigation, because indeed if any element of this is true, it does require some fairly serious action.”

Mr Nevins said the EPA and WorkSafe were notified and an independent contractor was hired to clean up the site.

“Council fully complied with all requirements and the expert agencies signed-off on this process,” he said.

“Council then engaged an independent legal firm to conduct an investigation into how this incident occurred.

“Council has been very transparent throughout this process and absolutely refute the allegations made by Ms Peulich in parliament.

“We encourage Ms Peulich to provide her reported documentation to the relevant authorities.”