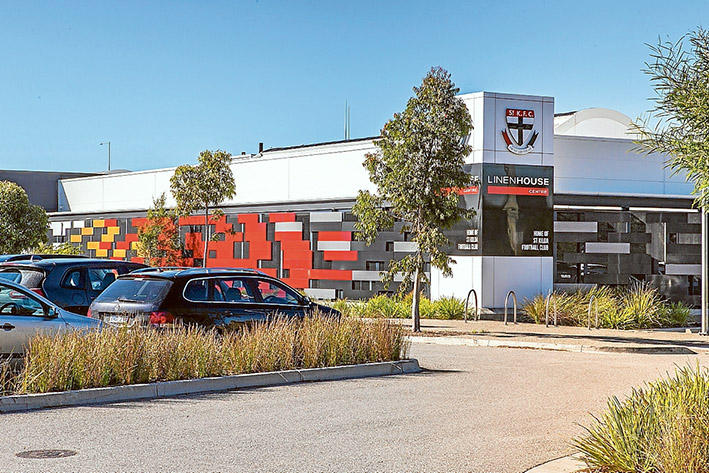 ST Kilda Football Club has been given a kick on the way out the door of Seaford’s Linen House by Frankston councillors critical of the AFL club’s lack of engagement with the community during its short-lived stay at the training and administration base.

The Saints will go marching out of the Seaford sports centre and head back to Moorabbin, possibly as early as the start of the next AFL season, and councillors now must decide to put the soon to be vacant Linen House to other use.

Councillors at the latest public council meeting on Monday 16 October voted to set up a council committee to begin looking for tenants to move into Linen House after St Kilda FC leaves Seaford.

Longtime councillors still on council who voted to welcome the AFL club to Seaford eight years ago voiced dissatisfaction at promises made that did not pan out in reality.

“I was persuaded over a period of time to vote for St Kilda to go in there,” Cr Colin Hampton said.

“We were told that there would be a $40 million bonus [annually] to the city of Frankston for this club to come here. I haven’t seen any of that.”

Cr Hampton said joint work in the community between St Kilda FC and Frankston Council “happened for a very short time and then ceased”.

Cr Glenn Aitken said he also voted to welcome the Saints to Seaford since councillors at the time were presented with “a very strong business case” that the move would be of economic benefit to the Frankston area.

“As time went by, it became evident that it certainly wasn’t turning out the way that we had hoped or would have preferred it to.”

Frankston Council kicked in about $4 million of ratepayers’ money to a joint AFL, state government and council deal to lure the Saints to Seaford in 2010.

The AFL club paid a peppercorn rent of $1 annually and contributed towards maintenance at Linen House.

Cr Hampton said he hoped Frankston-based “community sporting groups” could move into Linen House when the Saints move out.

“We were expecting much from St Kilda and unfortunately we didn’t get what we thought we were going to get. Hopefully, now we can turn this facility into a community facility.”

The Times revealed in May that Cricket Victoria had been in touch with Frankston Council about possibly leasing space at Linen House and mayor Cr Brian Cunial confirmed AFL South East had also expressed an interest (“Cricket play for AFL club training hub”, The Times 29/5/17).

Councillors at this month’s council meeting seemed to downplay another lease deal with an organisation based outside Frankston’s borders.

“I think our community and our sporting groups and our interested parties within Frankston are the ones who must get considered first and foremost with the usage of that building,” Cr Aitken said.

The council committee, to include “interested councillors”, council CEO Dennis Hovenden and “appropriate council officers” will report back to councillors on a monthly basis about potential future tenants for Linen House.

St Kilda Football Club was approached for comment before publication.