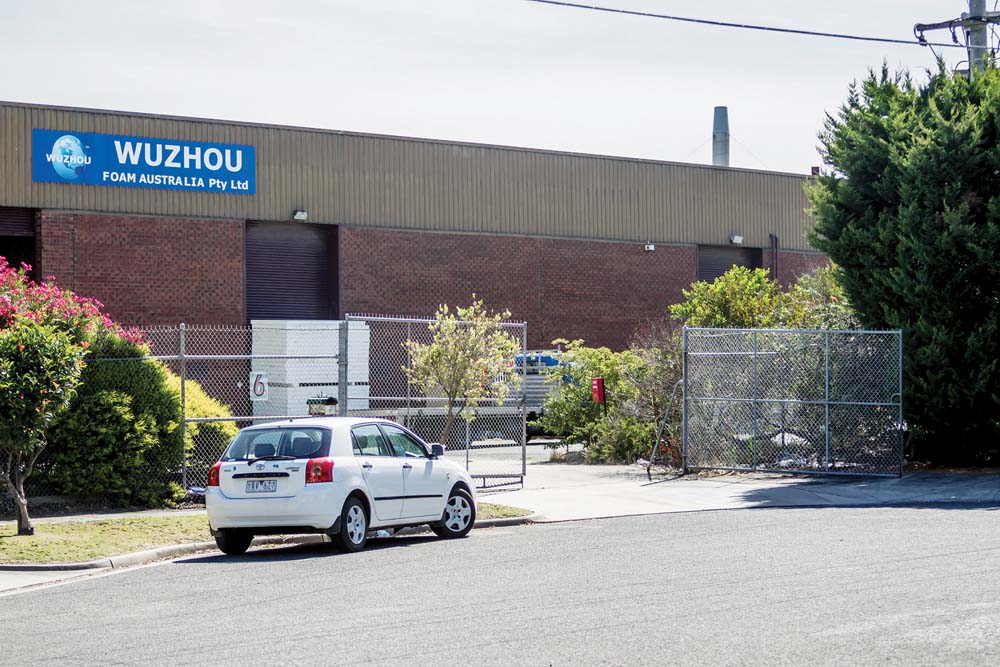 FRUSTRATED neighbours of a polystyrene making factory in Seaford have vented concerns about noise and pollution that have been repeatedly investigated by authorities over the past four years.

Residents near the Wuzhou Foam plant in Apsley Place have been quietly trying to have something done about fumes and noise pollution from the factory for years but finally voiced discontent with its operations at the latest public council meeting last month.

Seaford Community Committee chairman Noel Tudball spoke on behalf of fuming residents at the December council meeting and said they are not NIMBYs.

“The residents had no complaints about the previous clothing factory that was in that building,” he said.

“When the factory is operating residents have to keep the windows, doors and curtains closed.”

“The residents are a fairly good lot. They’re not belligerent … they want to give council a chance to respond … and go through the process.”

However, Mr Tudball said it seemed Wuzhou Foam has been operating at the Seaford site for five years “without a permit”.

The company lodged a planning permit application last July to Frankston Council asking for permission to operate its business within 30 metres of a residential area.

The company is based in an industrial zone next to other businesses.

“We manufacture polystyrene for insulation in homes and for businesses … it’s not a chemical production,” he said.

“Over the years the neighbours have complained and after the fourth year the council asked to apply for a permit to do business here.”

Council CEO Dennis Hovenden said residents first “raised concerns about the use of the Apsley Place property in 2014” and joint investigations with the Environment Protection Authority were “undertaken while council actively pursued a permit application for use of the land for industry purposes”.

“The business continued to operate throughout this process, which is common practice when an active permit application is with council for consideration,” Mr Hovenden said.

“Whilst the timeframe for this matter was extended pending appropriate information from the business operator, council officers continued to work with residents to address their concerns until an application that could be assessed was received.”

EPA southern metro manager Marleen Mathias said the agency visited the factory at council’s request for inspections twice in 2014, once in 2015 and once in July last year.

“[The 2014 inspections] resulted in EPA issuing a Minor Works Pollution Abatement Notice that required the company to take action to better control litter from entering the stormwater drains at the site,” she said.

“The second inspection confirmed that the work had been done, so the MWPAN was withdrawn.”

Ms Mathias said the EPA has advised council it has no objection to council issuing a planning permit if the premises are fitted with an air extraction and emissions control exhaust recovery system, no “offensive” odours or “nuisance” dust are discharged beyond the premise boundaries and all noise emanating from the Seaford factory comply with state environment protection policies.

The EPA has also instructed the company to hire an air pollution consultant to review the discharge of odours from the site, “with a view to eliminating them”.

Mr Zhou said he is worried council may force the factory out of business.

“If I knew this was going to happen I never would have opened here. At the moment we’re facing the risk that the council is going to shut us down.”

“I’ll cooperate with authorities and we’re not trying to ruin anyone’s life at all. We’re just trying to survive here.”

The factory manager said the company has now provided an indoor room for the guard dog to be based in at night time and is needed since intruders often enter neighbouring business premises.

He said the factory operates from 9am-5pm on weekdays and does not open on weekends.