Frankston salutes its Australia Day Citizens of the Year 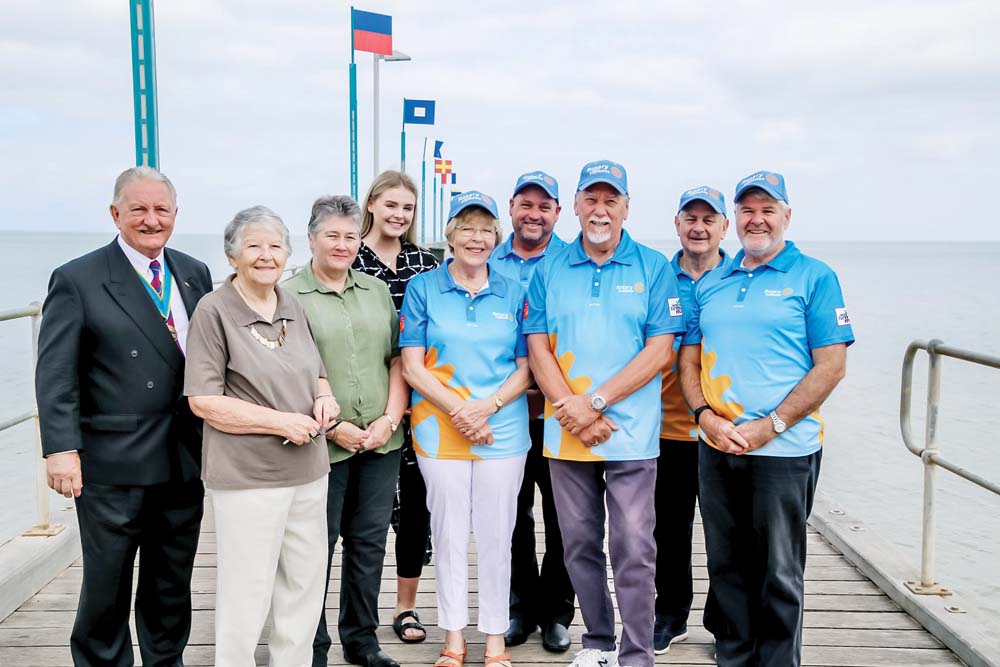 CHERYL Myers was nominated by Kelvin Park, the president of the Vietnam Veterans Association of Australia (Frankston Sub-Branch). The tireless community worker has been a member of the sub-branch for 11 years and secretary for nine years. She has also been the welfare officer for eight years and her vast knowledge of the veterans’ community in Victoria, particularly in Frankston and surrounding areas, allows her to fill both roles with distinction.

“They have feelings of isolation; they don’t realise there are others out there who feel the same way.”

Ms Myers joined the organisation to assist her husband, Les, and now provides support and organisational skills, arranges social events – and even drives the bus for war widows on outings. A weekly coffee group at the Frankston Power Centre has been a success: it started with six people and now attracts 24.

“You get a feeling of fulfilment,” she said.

Ms Myer’s reputation within the groups is unquestioned with members finding it easy to talk to her about their problems, Mr Park said. “I am in no doubt that the sub-branch would not exist today, let alone be one of the leading sub-branches in Victoria, if it were not for Cheryl.”

Ms Myers organised last year’s Vietnam Veterans Day Service at the Beauty Park War Memorial. It was such a success that it was lauded in federal Parliament, Canberra, by Dunkley MP Chris Crewther. Ms Myers is also the president of the Frankston and District Partners of Veterans Association. She is so highly regarded by this organisation that she has been asked to consider sitting on its national executive. National Executive.

HILARY Poad was nominated by former councillor Judy Wachendorfer, who describes her as an extraordinary citizen of Frankston. “Ms Poad’s contributions are inspired by her great passion for Frankston – its environment, liveability and community,” Ms Wachendorfer said.

Ms Poad said receiving the award was “an honour”.

“I have always loved Frankston as it is a caring community,” she said.

“It is a very old and established and there has been some marvellous work done by community groups.”

Arriving in Frankston in 1994, Ms Poad saw the need for positive change and set about achieving better outcomes. “As a democratic and dedicated community activist, her aim is to mobilise the community and involve interested parties to ensure the very best things happen in Frankston,” Ms Wachendorfer said.

Ms Poad says she has attended nearly every ordinary council meeting at Frankston for the past 20 years, often giving verbal and written submissions. She frequently participates at question time. She has also taken part in many council and state government workshops, panel hearings, forums and meetings “always with a clear vision and direction for the city”.

Ms Wachendorfer said Ms Poad had been an active volunteer, consultant, participant, advocate, networker, environmentalist, conservationist and community watchperson over all things happening around her.

“Her devotion to Frankston, especially through her impact on planning issues and urban design, has helped those who live here and those who will live in the future.”

EILIS Peters was nominated by John Albiston of Frankston High School, who described her as an outstanding young citizen. Eilis is the school’s deputy school captain. “She has excellent communications skills, is self-directed, highly motivated, has the ability to work and lead a team, displays initiative, possesses excellent organisation skills and inspires commitment to making a difference,” Mr Albiston said.

Eilis, 17, has been selected to attend the Ladies Somers Camp for 2018 through her involvement and passion for change. Inspired by the Daniel Morcombe Foundation, Eilis has continued educating students and teachers on the importance of safety for young people and the safety message that the foundation promotes.

“Eilis is a conscientious and highly motivated student not only in her studies but her passions,” Mr Albiston said. She received the 2018 Deakin Young Influencer recognising her leadership and work in the community.

She has been involved in fundraising for various community groups, including The Kokoda Track Foundation, Daniel Morcombe Foundation, Anzac Day and Remembrance Day and the Luke Batty Foundation.

Her dad, Darryll, said “words failed me” when he was told of Eilis’s nomination. “I’m normally pretty cool but I lost composure that day,” he said.

“She’s a wonderful child and knows that it is an honour just to be nominated.”

SEAFORD Farmers Market, which celebrated its 10th anniversary in November, has been nominated by David Cross. Held every third Sunday the market brings together stallholders who sell fruit and vegetables, meat products, bread and cakes, household items, such as soaps, candles etc., and arts and crafts, along with food and drinks to eat there.

Seaford Farmers Market offers the community the opportunity to support small, local producers and retailers in a friendly, pleasant environment.

The club believes the market has been the catalyst for the revitalisation of the Seaford Village shopping centre. “The Rotary Club of Frankston takes great pride in the positive outcomes for the community that has resulted, directly or indirectly, through the market,” Mr Cross said.