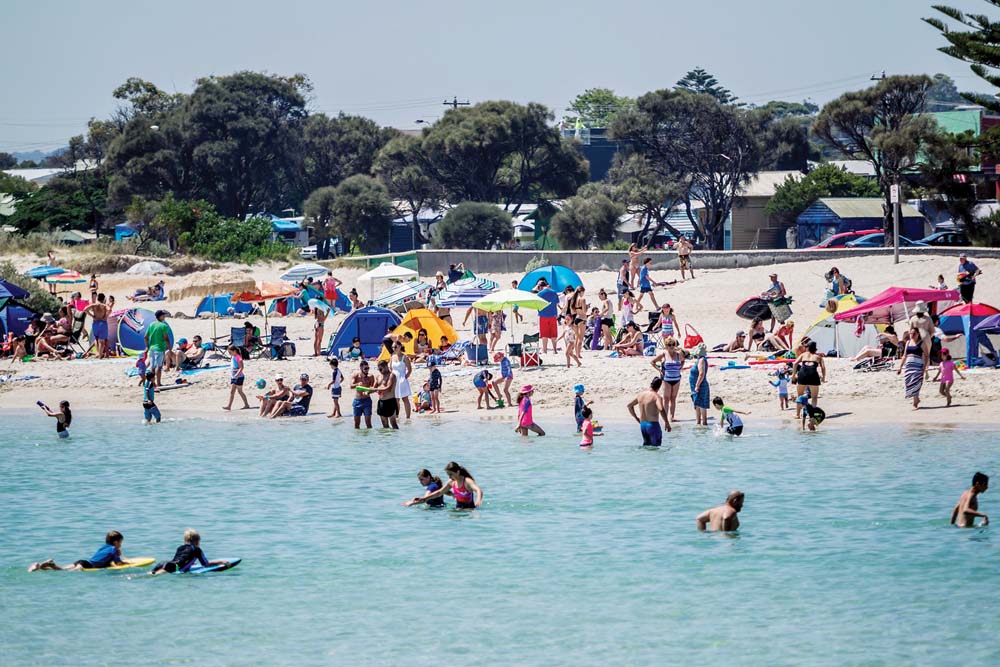 HOT weather over the holidays has prompted Life Saving Victoria to urge beachgoers to keep water safety “front of mind” at beaches and in pools.

“Whether you plan to cool down with a swim, paddle or surf, make sure you’re with a friend.”

Mr Scott said water users should “be prepared before heading to the water, and to read and obey safety signs when they get there”.

“It’s also important to drink plenty of water and keep an eye on those most at risk in the heat,” he said.

“Rips are the No. 1 hazard for swimmers, with more people drowning in rips than dying from shark attacks, cyclones and floods combined.”

His warning comes as Lifesaving Victoria reports that 29 people have drowned in Victoria from 1 July last year to 20 January this year. This is seven more than the five-year average (2012-17). Of the drownings, 15 were at the beach, 11 inland and three other.

So far this summer there have been 18 drowning deaths in Victoria – 11 more than the five-year average (2012-17). “This is the highest number we have seen since detailed records began in 2000,” a spokeswoman said.

Twelve were at the beach, five inland and one other.

Mr Scott said most beach-goers could not identify a rip current and two thirds of those who think they can, can’t.

“Learning how to identify and avoid a rip current is essential for beachgoers,” he said. “Rivers and bayside beaches can also have strong currents which have been prevalent and active this season. Also, it’s important to recognise that beach conditions can change from day to day – even in a matter of hours.”

Swimmers caught in a rip current should stay calm, conserve their energy and either wave an arm and call out for help. They should float with the current – hopefully back to a sandbank – or swim parallel to the beach to escape the rip. Then they should reassess their situation: if what they are doing isn’t working, they should try another option until they return to shore.

Stay calm and remember that it is possible to escape from any rip by using the right tactics, Mr Scott said.

With another week of the school holidays, parents and carers are advised to actively supervise children around water. “It only takes 20 seconds for a child to drown,” Mr Scott said.

Kayakers and paddlers should think twice about paddling alone and always wear a lifejacket.

“When paddling, make sure you have the ability to raise an alarm. Know your own capability and always tell someone of your plans,” Mr Scott said.

To find out patrolled locations download the beachsafe app or visit beachsafe.org.au

Multilingual resources can also be found at beachsafe.org.au/surf-safety/multilingual which has guides on how to enjoy the beach safely.

The Vic Emergency App has waterway warnings at emergency.vic.gov.au and up-to-date conditions and warnings can be found at the Bureau of Meteorology app or bom.gov.au

Signs show the way on rips WITH the number of drownings so far this summer at a 10-year high, lifesavers at Gunnamatta beach are seeking to engage with beach-goers to educate them about rips and water safety.

The club, with the help of Progress Signs Mornington, has put together this sign to encourage people to learn and interact with lifesavers.

“If you’re heading to the beach, remember that rips are the number one beach hazard for swimmers,” Life Saving Victoria’s operations manager Greg Scott said.

“Each year more people drown in rips than die from shark attacks, cyclones and floods combined.”