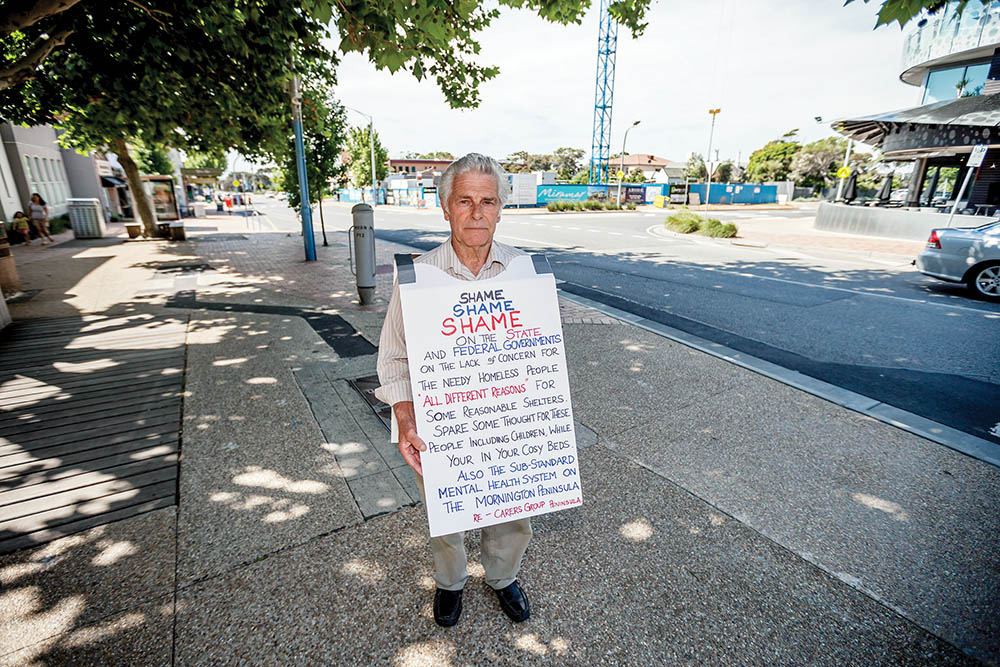 THE shortage of safe, long-term accommodation for those affected by mental illness in Frankston and on the Mornington Peninsula has one man fearing for the plight of a family member.

John Bradford, of Mt Martha, said “issues with drugs and alcohol” five years ago had forced him to try to find alternative accommodation for a relative with a mental condition.

A search for suitable government-run accommodation proved fruitless and the alternatives, such as privately-run boarding and rooming houses, were often unsafe and cramped.

The family member, a man whose name has been withheld, prefers to sleep on the streets of Frankston or on the peninsula foreshore.

“We had to take out an order against him because of his erratic behaviour,” Mr Bradford said.

After short periods at Frankston Hospital’s 2 West Ward, which treats those with adult acute metal health issues, as well as at the Salvation Army’s crisis accommodation centres, the relative soon found himself back on the streets.

“We always assumed he would be safe and supported in public crisis care accommodation but he didn’t seem to fit in very well,” Mr Bradford said.

After one short stint in hospital his relative walked out unaccompanied and stood in the middle of Nepean Highway. Police in a divisional van took him to the cells where a small knife was found taped to an ankle. He was fined $1600.

“We told the police he was unwell and on medication and expected him to be taken back to hospital, but he was pushed out onto the street at midnight,” Mr Bradford said.

A community treatment order was annulled and the man received no follow up care from the crisis centre authorities who had previously treated him.

“People like this are being pushed out into the community to fend for themselves. Our relative was lucky to have us to fall back; some people don’t have back up.”

Mr Bradford recently wore an A-frame notice board and walked the streets of Mornington to draw attention to the lack of help for the mentally unwell.

He walked Main Street with his A-frame that stated: “Shame, shame, shame to federal and state politicians for their lack of concern for needy, homeless people. Spare a thought for these people – often children – while you are in your cosy beds.”

The Peninsula Carer Council’s Aline Burgess said homelessness and people “sleeping rough or in their cars” on the peninsula was an “enormous problem” that was not receiving adequate government support.

“The government represents the people and the people need to advocate strongly for action on this.”

Ms Burgess said the carers’ council held support meetings and promoted its website and Facebook page so those in need could easily contact its members for help.

“We offer referrals, we listen and we advocate for carers so they can provide better treatment. We create awareness through our Open Dialogue program.”

She said Mornington Peninsula Shire was trying to improve services, but that private boarding houses “may be the only accommodation available”.

“It’s a bleak story,” she said. “Depending on the person’s income – whether Newstart or a disability support pension – we can help them by putting in offers for priority housing, but it is a long wait for a single-bedroom unit.

“There are not enough single-bedroom units and these mainly go to the elderly homeless, keeping younger homeless on the streets.”

“But the reality is that no one on New Start can afford a private rental over $190 a week and it is a miracle if you can find a property under that.

“There may be other options but they would probably not suit a person who is dreadfully unwell.

“It’s frustrating but there’s not much we can do.”

While Mr Bradford’s A-frame action might seem a little dramatic to some people, he’s steadfast in his resolve: “If I don’t do anything I will be letting them down.”