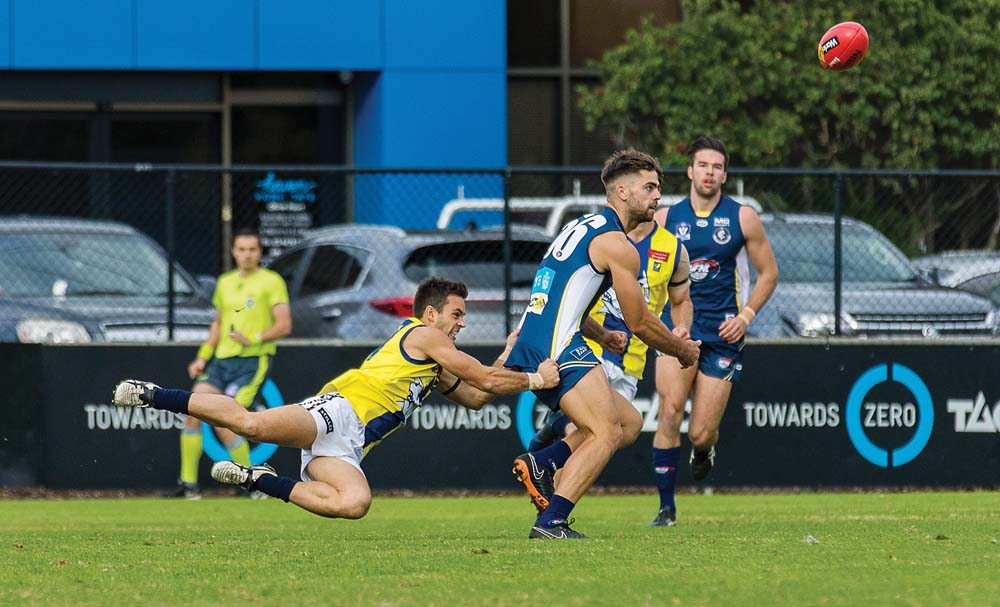 WITH regular MPNFL football put on hold for the week, the 2018 AFL Community Championships brought together the best and brightest from the league to take on the Northern Football Netball League at Preston City Oval this Saturday.

The men’s interleague competition, being played a little closer to home than the AFL’s match in Shanghai played at the same time, saw the MPNFL and NFNL face off in a third vs. fourth place clash, with the winner set to take on top ranked Eastern Football League in 2019 for the right to be recognised as the number one Victorian competition.

The MPNFL Sharks side were led by captain Warwick Miller of the Mornington Football Club, and were coached by former Mornington coach Chris Holcombe.

The Sharks were set to face a tough challenge from their NFNL opponents, who had named a strong defensive lineup that could cause MPNFL a lot of problems.

The match began in good conditions, with no rain or wind interrupting the game. Within five minutes, it was the MPNFL who had landed the first blow, with Sam Fox kicking his set shot from 50 metres truly to open an early lead within five minutes.

The first quarter fight back from NFNL was incredibly sloppy, and although they had the run of play for the majority of the quarter, they could only manage seven straight behinds and no goals up to quarter time.

In the meantime, MPNFL looked clinical, with Billy Quigley and Luke Hewitt scoring majors before the first break, the latter being an easy end to end goal that resembled more of a training drill than a competitive interleague match. At the quarter time break, MPNFL held a comfortable 3.3 (21) to 0.7 (7) lead.

After the first break, the NFNL finally kicked their first goal through Patrick Fitzgerald, before quickly scoring another to bring the margin down to one point.

A much improved and significantly more motivated NFNL side kicked continued to kick on, establishing a ten point lead before Luke Hewitt again kicked truly to bring his MPNFL side back into it. With the hosts having blitzed the second quarter with six more scoring shots than MPNFL, the Sharks could count themselves lucky to have only been one goal behind at half time.

After the main break, things went from bad to worse for the MPNFL men, with NFNL’s Patrick Fitzgerald kicking his second and third goal for the game within the first 15 minutes of play. Despite struggling to keep up with their opponents after quarter time, MPNFL still went into the three-quarter time break with a sliver of hope, only trailing by 13 points, with the score being 5.7 (37) to 6.14 (50)

After the final break, the NFNL found another gear and blew the MPNFL Sharks out of the water. A big mark from Patrick Fitzgerald, who was among the best players on the day, and a goal within two minutes set the tone, as NFNL went on to score seven unanswered goal and put MPNFL to the sword. Having only scored two goals since the first quarter, the MPNFL had been toothless.

In a moment that summed up the afternoon, NFNL’s Reid Brandt capitalised on a shocking turnover from a simple MPNFL kick out to make certain that MPNFL would not come back, slotting home coolly from 25 metres out and putting his side comfortably ahead. The MPNFL players were not on the same wavelength, and were outclassed easily by NFNL.

The match came alive at the death with NFNL’s Ryan Stone hit by MPNFL’s Michael Debenham behind the play with 10 minutes remaining, sparking a melee between both sides late in the game. As the two sides brawled, play on was called and Jordan Perry hammered home another goal for NFNL.

MPNFL could do little to stem the flow, and the final score reflected  an incredibly disappointing performance by the Sharks, with the game finishing 7.7 (49) to 12.17 (89)

MPNFL’s Lachie Batten was awarded the best on ground medal for his side, and Chris Holcombe addressed the result with grace.

“Northern really put us to the sword in that last quarter, they were really fantastic today, so congratulations. We got run over in the end and lacked skills by foot, but we’ll come back harder,” he said in his post match presentation.