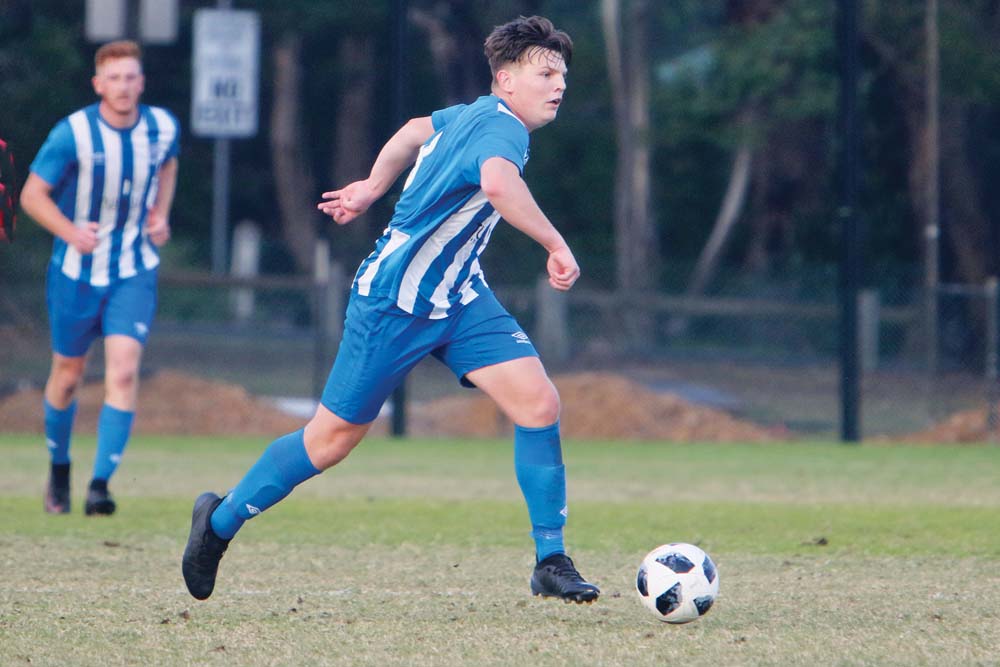 “He’s a huge signing for us, a very exciting player and I think the fans are going to like what they see,” Macleod said.

Heath is recovering from osteitis pubis but was able to train freely last week.

Clothier and Swain made their senior debuts against Melbourne Victory at Epping Stadium on Sunday as Macleod’s men lost 3-0.

A deflected Nicholas Sette strike in the 23rd minute caught Langy keeper Robbie Acs stranded and gave the home side a 1-0 half-time lead.

Two minutes into the second half Victory went further ahead thanks to Sette and an injury to Clothier forced him to come off as Langy reshuffled its defensive set-up.

Birkan Kirdar outpaced the Langy defence to make it 3-0 in the 61st minute and although the visitors enjoyed their best spell of the game for the next 15 minutes shots from Callum Goulding, Johnny Kuol and Liam Baxter were met by superb saves from Victory keeper Majak Mawith.

Langy missed an opportunity to go third in NPL2 East and the defeat adds to the importance of next weekend’s home game against Box Hill United as the local club strives to cement its newfound status in the elite competition.

Southern United gained its first point of the NPLW season when it came away from Wembley Park on Saturday with a 1-1 draw against Box Hill United thanks to a second-half goal from Bayside United recruit Sarah Wieck.

The result ended a run of 13 consecutive losses but with no relegation from the elite women’s competition Southern will continue with its policy of player development.

The club expects to move into its new training base at the multi-million dollar Wedge Road sports development in Carrum Downs in coming weeks and hopes to use the planned synthetic pitch for matches next year.

In State 1 South-East news Mornington continued its winning run with a 1-0 home victory over Eltham Redbacks on Saturday.

A clever Sam Scott chip in the 70th minute beat Eltham keeper Santo Dell’Aquila only to strike the underside of the bar but Keegan Ziada was on hand to head home from point-blank range.

The result narrows the gap between third-placed Mornington and league pacesetters Manningham and Richmond who both lost last weekend.

Frankston Pines and Peninsula Strikers continue to flirt with relegation and next weekend’s showdown between the State League 2 South-East rivals may prove to be a season-defining fixture.

Pines went down 4-0 away to league leader Doveton who led 2-0 at half-time with goals from Delfin Mosibe Esara and Josh Frame and second-half goals from Slavisa Saric and Simon Mur sealed Pines’ fate.

Strikers lost 1-0 away to Heatherton United on Saturday night, the winner coming from the penalty spot and converted by Michael Gross in the 25th minute.

Strikers blew a host of chances and lacked composure up front.

To add to their woes they had a great chance to level from the spot in the second half but former Pines keeper Alfonso Cardinale saved Ryan Thompson’s conversion attempt.

Skye United made it seven wins in a row and sits on top of State 3 South-East after its 3-1 home win against Middle Park last weekend.

However, the win was soured when influential captain Marcus Collier was stretchered off in the second half with what looked to be a serious knee injury and the club is waiting on results to determine its severity.

Skye went ahead in the 42nd minute when Chris Driver’s free-kick found Daniel Attard at the near post and the striker controlled and turned on his left before finishing with a neat strike.

Attard got his second five minutes into the second half when a skilful Caleb Nicholes’ flick sent Mohamad Elhassan clear and his left-foot cross found Attard who buried the chance.

Nicholes got on the scoresheet when he bundled the ball over the line from another Elhassan delivery in the 70th minute and although Tommy Fardoe pulled one back for the visitors a minute later the damage had been done.

Seaford had started well but in the 11th minute the home team broke forward and a hopeful shot from Alpy Camuzcu managed to float over new Seaford keeper Jimmy Zafiriou to open the scoring.

In the 24th minute, a long ball over the top was controlled perfectly by Jeremy Schwellinger who then sidestepped a defender and slotted calmly passed Dingley custodian Nick Abougelis to make it 1-1.

The decisive moment in this contest came in the 88th minute after Dylan Waugh had missed an open goal and from the resulting counter attack substitute Kerem Akyayla got behind the defensive line and rounded Zafiriou to finish into an open net and seal the win for the Stars.

Seaford has signed Luke Murray from Frankston Pines and hopes to have him available for this weekend’s catch-up match away to Brighton.

An injury-time strike from captain Bosco Abbasmoi kept Sandown Lions on top of the State 4 South ladder but broke the hearts of Baxter fans in a hard-fought tussle at Baxter Park on Saturday.

Abbasmoi wore the number 4 strip yet the Sandown teamsheet had no number 4 listed and when this was drawn to the attention of referee Aurel Ioana at half-time he went into the away team dressing room to resolve the issue.

He had little choice given that Abbasmoi had given Sandown the lead at the interval with a low strike from the right of the area after Baxter failed to clear in the 22nd minute.

But Baxter scored twice early in the second half to charge to a 2-1 lead.

Stuart McKenzie levelled in the 49th minute with a low shot from inside the area and when Sandown keeper Liam Chitters could only parry Ben Meiklem’s strike from the right in the 53rd minute big Dan Disseldorp had a tap-in.

Former Skye United player Wumjock Jock played a quick ball forward to Sandown striker Roy Ruea who skilfully chested it down then tapped it past advancing Baxter keeper James Foster to make it 2-2.

By now Baxter fans were in full voice and the nearby linesman who had doubled as referee of the reserves match was given a variety of options on how to better use 180 minutes of his life.

Then just when it seemed that the home team would hang on for a meritorious point Abbasmoi struck again to settle the matter.

Somerville Eagles regained their winning touch when downing Drouin Dragons 4-2 in West Gippsland on Saturday and player-coach Dave Greening now has his side one point off league leader Old Mentonians.

Somerville already has five more points than it accrued during the entire 2017 season as it zeroes in on promotion from State 5 South.